When I hear gallop, I think horse – was what Angela Merkel could have answered.

But: “I see”, is what she said, in a much better, short and dry and poignant way, when a reporter asked her what she thought about the assertion of the former US ambassador to Germany, Grenell, that President Trump had charmed (verzaubert) her.

Yesterday, Pádraig was discharged from Burgau. He left in his wheelchair as he did two years ago when he was here last. Words are not enough to describe our gratitude to the people running the Therapy Centre and the people working there. They had admitted Pádraig with open arms and allowed us to look after him while he was there – all under quite difficult and unique circumstances.

Before Pádraig had the operation in Munich, they had taken the time, at very short notice, to discuss with us the different options for treatment and advised us what they thought was the best choice. Based on decades of experience. When they reached the same conclusions as they had in Pforzheim we knew what way to go to help Pádraig. 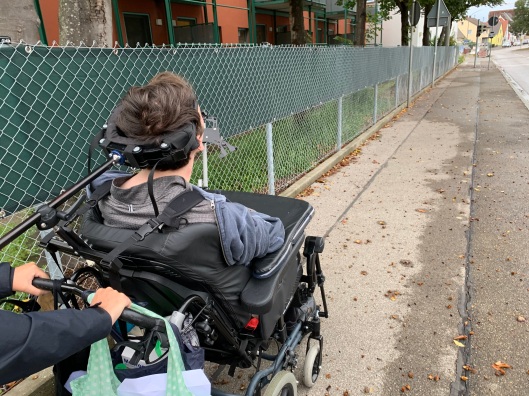 The time Pádraig spent in Burgau after his operation was exactly what he needed to support his recovery. The way Pádraig (and us) were treated in Burgau was exemplary.  The outcome was the best outcome we could have hoped for.

In Burgau, as in Pforzheim (where they also had recommended to see the neuro-orthopaedic surgeon Dr. Poschmann in Munich), Pádraig was treated like you and I. He urgently needed help and they (as in Pforzheim) did their very best to assess him, to consider the available options and then helped to organise what was, in their and our and Pádraig’s opinion, the best available option. With all the dignity and respect, with all the patient-centred care you and I had deserved as a human being – and Pádraig deserved, in their eyes, equally, without any doubt or hesitation. The type of medical care that so many talk and write about but too few practice.

Today, we’re back from where we started, in Pforzheim, where yesterday we enjoyed a great welcome breakfast in great company. Having recovered and put back on the road in Burgau by some of Germany’s best doctors and therapists in the field, Pádraig will be back on his feet for a week here in Pforzheim, before heading to the Rotterdam ferry next Saturday.

Ach so. Pure brilliance. And so super cool. Not an attribute you’d usually associate with the German chancellor. (The tweet incorrectly quotes Grenell saying “entzaubert” instead of “verzaubert” which is what the journalist asked in the press conference.)

Last Thursday, with huge credit to be given to the HSE team trying very hard to promote the 2015 Decision Making (Capacity) Act, an explainer video featuring many ‘ordinary’ people who are going to be affected by the act, including Pádraig, was launched following many months of hard work. It was a great occasion joined online by more than 700 people. It turned out, a bit to my surprise, that it was aimed at healthcare professionals and not at the general public. And then, there was a bit of politics and an appeal to press politicians to finally, finally commence the act which will, finally, finally bring Ireland more in line with the UN’s Convention on the Rights of People with Disabilities, CRPD.

The 2015 Assisted Decision Making (Capacity) act, we heard during the HSE online launch of the video promoting the act, will be commenced, if all goes according to plan (!), in 2022 – seven years after it was passed by the Dáil, the Irish Parliament. Seven years. Mein Gott.

(Pádraig’s, Pat’s and my contribution is right at the end of Thursday’s launch video recording. When I checked, it looked like there was a problem with the video recording – we could be heard but not seen – but maybe that was just my connectivity.)

For me, the most important part of our contribution, was the assertion that “Not only horses gallop. And not only those with a clear voice and their eyes wide open can hear, understand, read, reason, and decide.”

Here is an outline of what we said.

When I hear gallop I think horse, a doctor once told us.

When someone sees Padraig, with his eyes half closed, with little movement, and no voice, they often think he can’t hear, listen, read, understand, reason, or decide.

Assumptions help us to understand the world around us. But they can also limit, and sometimes dangerously limit, our capacity to look a bit closer, to see the Zebra galloping down the savannah in Dublin Zoo or to allow Padraig an opportunity to live his life, to offer him inclusion, equality, participation, and self-determination.

Here are two examples Pádraig encountered of such limitations.

One of the first questions we were asked by staff in the neuro ward of Beaumont Hospital following his accident was: “Which nursing home is he going to go to?” Nobody even considered asking Padraig about his preference, or indeed whether he wanted to spend his life in a nursing home. As it happens, he didn’t.

Another example of such limitations Pádraig came across was at the last elections, when a neighbour kindly offered to stay in the house with him while we, Pat and Reinhard, went out to vote, assuming that he didn’t vote. Another neighbour the three of us met at the entrance to the polling station offered to stay outside with him while we went in to vote. Padraig’s interest in politics has not diminished since his accident seven years ago and he stays well on top of current affairs. He is always very informed when it comes to elections or referenda. And he always votes.

One of the key words in the new act is assisted decision making. We have learned that this ‘assistance’ must come from somebody who knows the person well and understands them, especially for those in a similar situation to Padraig’s. Otherwise, big misunderstandings will happen. Here is one example.

When a therapist asked him before the last elections if he liked Donald Trump, using his manual communication device he answered with one bleep, meaning ‘yes’, surprising the therapist. The family knew Pádraig liked listening to Trump as he found him entertaining. So we asked him whether that was true, and he answered ‘yes’. When we then asked him if he liked Trump’s politics, he emphatically answered “no”, bleeping twice.

But assistance must come not only from someone who understands the person and is close to them, it must come above all from a person who has their best interests at heart. Health professionals, courts or court appointed officials might not always be the most suitable for this role.

Over time, we have learnt that Padraig can read, understand and solve complex problems. He can read questions and, using a switch, the ‘bleeper’, pick the correct answer. His sense of humour and language preferences have not changed. If you asked him to spell his name and you expect ‘P’ followed by an ‘a’ you will learn that he prefers an ‘á’. He still likes his mother to speak to him in English, his father in German and his friends as Gaeilge.

We have learnt that the only barrier for him to express himself and fully participate in conversations is our incapacity to provide him with the adequate means. That is why we are constantly on the lookout for new technologies, like the ‘handshoemouse’ that we found during the summer, or leading-edge research ‘translating’ cortical activity into text, in other words: translating your thoughts into speech.

Central to the most fundamental human rights is the right to self-determination and the right to be included in society’s decision making processes. It is encouraging to see that these rights are gradually becoming the norm in Irish society and that they are being supported by the new act.

It will be up to each and everybody among us to question and change existing perceptions, preconceived expectations, mindsets and embedded attitudes in relation to a person’s capacity. Even the genuinely well-meaning will need to make a big effort in order to see beyond the obvious, as we have seen in the examples above.

For us as family members, the act marks a radical step in the right direction. We look forward to Padraig’s participation and inclusion in his affairs, soon to be legally recognised in Ireland. We look forward to not having to fear that outside bodies or persons may take decisions against Padraig’s wishes, decisions which may not be in his best interest. It is a source of joy and relief to us that his decisions will finally be respected legally as well.

Not only horses gallop. And not only those with a clear voice and their eyes wide open can hear, understand, read, reason, and decide.

“No decision about me without me” (Pádraig using his computer-generated voice.)