Sounds like ‘something that floats’. Doesn’t it? And the word came to my mind when I thought of the boat we’re on tonight.

But it means something entirely different. As I learned yesterday, when she was diagnosed with the China Virus, together with her husband.

Anyways… in a land far, far away and

more than 40 years ago someone introduced to and played the classic “On the road again” for me (without the harmonica and guitar solos:), somewhere in Franco’s Spain. He was the real deal: flowers in his hair and a VW Minibus to move around. The type of person who would have sang “Alice’s Restaurant” had he not been German but American. And if we’d have had more time.

I was impressed anyways. It was my first trip abroad on my own and I had met hippies only in The Drifters by James A. Michener.

Even though he used just two chords and just did the chorus it was super cool.

Tonight we’re on the boat again. 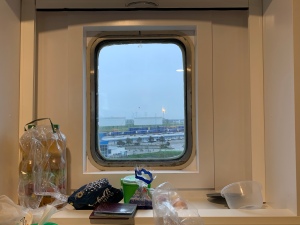 Four months later. A few t-shirts and a pair of shorts did the trick. Like that summer in Spain. And like during that summer in Spain, all turned out well, even though it wasn’t always easy. And as at the end of that trip down South that year, after all these months I am happy that it is over.

Last week, in Pforzheim, Pádraig was back in the Lokomat. And he really liked it.

We practised and tried out different ‘settings’ for him, to support his thorax from the front, protect his back with a towel, his legs with a layer of neoprene, and keeping his head up with a strap.

By the end of the week, I felt comfortable that, with some help, I could get Pádraig in and out of the Lokomat in a reasonable time and allowing him to have the exercise he so urgently needs.

We had a few sessions walking with Pádraig the width and length of the therapy room in a much more hands-on way as well, without the help of any sophisticated equipment. And there was a smile on Pádraig’s face – so different from the pain he felt just a few months ago when we were in Pforzheim thinking his hip and leg could get fixed with therapy.

During our week in Pforzheim we talked to some families about Pádraig’s procedure. Guess what. Almost all of the families we talked to, three of them, had a member who had undergone a similar procedure. Some more than 10 years ago. Not necessarily all involving hips but all involving a similar procedure. How is it that if this type of procedure is so common, at least in Germany, as it seems to be that we had never heard of it although we asked every specialist, doctor, therapist and people in the know? The world is full of mysteries.

Apart from hard work, we also had some fun. COVID limited fun, slightly out of season. It looked exactly like a Christmas market, down in Pforzheim city centre. Even the weather had adapted. What was missing was the crowds.

The summer is definitely over. Bring along Christmas.