“If you can go surfing in Afghanistan you can do anything”, Afridun Amu said this week on a German Radio Station. Considering that the country doesn’t even have a shoreline and is better known for the decidedly anti-sport Taliban, I couldn’t but agree with Afri. The story he told is backed by a Kickstarter Campaign and you can see a short documentary about it on Youtube.

Afri says, “Most people know Afghanistan only from the news. It’s mostly about terror, war, negative stories, and that’s definitively part of the reality in Afghanistan. (…) But there is also the Afghanistan of very beautiful landscapes, interesting personalities, an incredible spirituality.” He says that when he and his friends arrived in the Pandschir valley, the people there had never ever heard of anybody standing on a board on top of water. Never mind seen it. And they were amazed.

In my mind, it couldn’t come much crazier than this.

“Dreams are meant to be lived”, says Afri.

Even the most incredible and mad ones.

Before Pádraig went out for a walk on Saturday afternoon, he went out to his balcony. Standing. I am not sure what it looked like from below, but I know that Pádraig felt on top of the world.

One of his therapists this week was a senior Bobath instructor who did her magic on Pádraig’s body. I tried to pick up some ideas we could take home with us. But most of the time it was like watching Rembrandt working on one of his masterpieces and me trying to pick up some of his techniques. Pádraig really liked the sessions and his hips visibly benefitted.

When the master was not around, we mostly stuck with our routine exercises. Standing for each transfer, now again with both feet on the ground. Peddling the MotoMed, at times now without the headband. Resting in bed, with the right leg again being of the same length as the left. 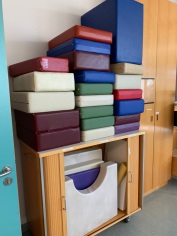 Our stay in Burgau will be coming to an end soon. If there was only one thing I’ll be taking away from here, and there are many, it would be an increased conviction and enthusiasm to provide lifelong therapy to Pádraig and those who, like him, need it to survive. Secondary, life-limiting injuries can often be avoided and be dealt with given the right support. Not providing this support would be negligent, cruel, and inhumane. Equality, participation, inclusion, and self-determination are universal values for all, including for middle-of-the-road people, straight, GBLT, poor, rich, old, young, white, black, yellow, brown, crazy (but highly motivated and fun) Afghans and those with a severe brain injury.

If Afri can surf in Afghanistan, we can make life and living with a severe Acquired Brain Injury a reality. Watch us.

Pádraig will be looking for a new personal assistant / carer from early October. Please spread the word and get in touch if you know of anyone who might be suitable and interested. – Thank you in advance!

The HSE will be launching the Assisted Decision Making Act 2015 with an “Explainer Video” featuring Pádraig who will also be at the online launch of the video this coming Thursday. You can register to join the event and watch the video later on. Here is the official announcement of the online event.

The Office is launching an Explainer Video on the Assisted Decision-Making (Capacity) Act 2015. The Explainer video includes simple core messages on the Act from the voices of staff and people who use our services. It is intended for use across all services to provide information to staff on what the Act means for their practice.

Sound quality for the launch may be better through a phone so you may use the Irish dial-in number by telephone as follows as an alternative: Telephone: 01 526 0058. When prompted, enter the following  access code: 137 842 8368

The explainer video will be uploaded to www.assisteddecisionmaking.ie following the launch.