What’s going on in the world is equally bizarre and mysterious.

I can’t make any sense of any of it. – Except in the case of the singers.

This day, 28 years ago today, the famous Grammy Award for the best album was revoked, for the first and only time, when the German (!) duo Milli Vanilli (remember them?) confessed: they hadn’t sung on their 1989 debut album.. 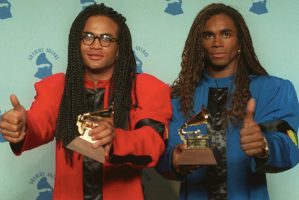 The scandal cost them their 1989 Grammy for Best New Artist. According to today’s Backstory in the New York Times, since then  Milli Vanilli has become pop culture shorthand for fraud.

So, next time, you come across something shady, and you don’t want to call it ‘fraud’, you could just say: “Oh well, that’s just Milli Vanilli!”

The NYT writer concludes: “We’ll never know if Milli Vanilli was actually years ahead of its time.”

Just in case you hadn’t noticed or heard: today is International Men’s Day. (You probably heard that joke a thousand times: but isn’t every day men’s day?) So Pádraig and I went to an event (“The Future is possible”) organised by DCU’s Equality and Diversity Office where we were greeted by bags with water and sandwiches (“light refreshments”), a DCU “Women in Leadership” brochure, and Tom Clonan who was going to give the talk of the day. 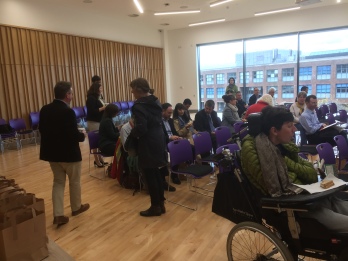 While we were eating our sandwiches, Tom started his talk by stating, several times, that he was a feminist. On International Men’s Day! He then talked the audience through the various stations of his professional life. I turned out that Tom is one of the original whistleblowers denouncing, in his PhD thesis, sexual abuse and rape in the armed forces. He had to fight his former employers with his legal team to establish his credibility. Tom later recommended his legal team to another whistleblower, Maurice McCabe.

There is a part I didn’t quite understand and which I don’t get in other contexts either: why on earth did the women who suffered the sexual abuse and rape in the armed forces never file a formal complaint with the Gardai, the police? Why was none of the rapists ever brought to court?

Following the event, we hang around a little and chatted to a few people, including Tom Clonan. He continued to talk. Something I do at times. When listening would be so much more helpful.