John Lennon would have been 80 years old last Friday.

Had he not been shot dead 40 years ago.

I’m sick and tired of hearing things
From uptight, short-sighted, narrow-minded hypocritics
All I want is the truth
Just give me some truth

I’ve had enough of reading things
By neurotic, psychotic, pig-headed politicians
All I want is the truth
Just give me some truth

Which year did he write this song again???

Sounds to me like as if there’d be a good chance he’d be shot a second time one of these days had he survived the first attempt to kill him and had he continued to sing that kind of song.

This past week, Pádraig was back on his feet and back on the Lokomat. 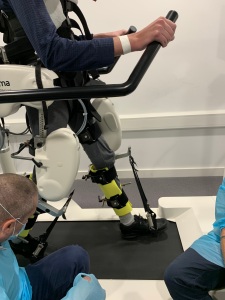 I keep imagining. – Could Pádraig have been spared more than a year of deeply troubled nights and lack of sleep and what must have been at times excruciating pain?

A ‘good night’ before the intervention he went for recently meant he had slept continuously for a few hours, maybe five or six, and that was a rare occurrence. Most nights were not ‘good nights’. During those nights he slept maybe one or two hours, woke up for an hour or two, moved around in the bed in pain and went back to sleep for another one or two hours, because of sheer exhaustion.

We had to protect the sides of his bed with thick foam covers and close the gaps between the mattress and the bed side protectors with specially made foam covers to prevent injuries.

It must have been close to unbearable for Pádraig to be unable to get a good night’s sleep. It was extremely difficult for anybody staying with him for a night to see him struggling so hard, being unable to rest, pulling up his legs, especially his right leg, almost up to his chin, twisting his legs around each other, over time being unable to stretch out his right leg anymore because these movements had caused his right hip to sublux, pushing the head of the right femur (partially) out of the socket.

We asked everybody we could think of. Described what was happening.

Eventually, we decided that we had to go on a long journey to get Pádraig the help he so desperately needed.

Following his discharge from the rehab hospital in Burgau, we have been staying with Pádraig now for more than two weeks during the nights. He goes to bed in the evening. We help him to turn around twice or three times during the night. He wakes up in the morning. After a really good night of at least eight hours, and often 10 hours or more of sleep.

The difference between ‘before and after’ could not be bigger.

I keep imagining. What would have happened to Pádraig had we not taken him to see the specialists in Burgau and Munich, had we allowed his condition to gradually deteriorate? Had he not eventually received the necessary help by people who cared, and for whom Pádraig has the same right to physical integrity, to his health, as you and I? Who treated him with ‘dignity and respect’? Who took a ‘patient centred’ approach? Who did not discriminate because of an existing condition?

Is not knowing as bad as not acting despite the knowledge?

John Lennon sang nearly 50 years ago. Maybe Heraclitus of Ephesus, the Ancient Greek, pre-Socratic Ionian philosopher, got it wrong when he found: “Panta rhei” – everything flows and everything changes?

It’s 40 years ago this month that I met my soul mate in the Calle Rúa Mayor in Salamanca. Yesterday, 35 years ago, we got married. One day, we’ll go back there. Some people will always have Paris. We’ll always have Salamanca.