Because of a temporary tightening of visiting regulations I got a taste this week of how the China virus, the kong flu, can cut people off most contacts, isolate them, nearly put them in solitary confinement. During the week, the rehab hospital introduced, just for a few days, pretty strict control measures. I was still allowed to go in but we could not leave the room and there was no visiting.

What must it feel if you are, with a severe Acquired Brain Injury, practically locked up in your room, for months, with no visitors, and you don’t even (fully) understand what is going on? Are Young people with a severe Acquired Brain Injury in Nursing Homes updated on the developments and the ever-changing impact of COVID-19? Even if they are, do they understand what is going on?  I can not imagine what it must be like. Totally dependent and practically locked up over months, which no end in sight.

Pádraig is back on the MotoMed, peddling every evening for at least half an hour, most times he makes just over 5km.

That’s just a little less than it would take you from Burgau to get to Grundremmingen, where Bavaria produces ‘clean’ energy. It’s the place you will always find, especially on a good day, when the sky is blue – except over Grundremmingen, according to someone who lives there. There’s always a white cloud hanging over the place. I don’t think I’ve ever staid that long in the neighbourhood of a nuclear power plant. Strange how beautiful it looks.

While Pádraig is peddling away, I play music for him and try to entertain him a bit, so that it doesn’t get too boring. There are days, when I share some of my favourites instead of trying to play his. The other evening, I played the soundtrack of Easy Rider. For the first time, I later looked up the lyrics of Jimi Hendrix’ contribution, If 6 was 9.

If the sun refuse to shine
I don’t mind, I don’t mind
If the mountains fell in the sea
Let it be, it ain’t me
Alright, ‘cos I got my own world to look through
And I ain’t gonna copy you

I thought there was a lot in this song. Hope, motivation, strength. The music might not be everybody’s cup of tea – though I would agree with the comment that “Mitch Mitchell is the most underrated drummer of all time” as this song proofs. Mainstream is not always best. If you like it a bit more melodic, you can Go your own way. “Suddenly, your Mom’s music doesn’t seem so bad”, says one comment.

Anyway, Pádraig continued with his rehab. Standing up with his back against the wall (there must be a song in this), standing up on the tilt table, when he is getting out of bed. 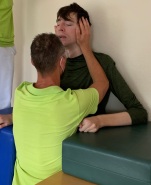 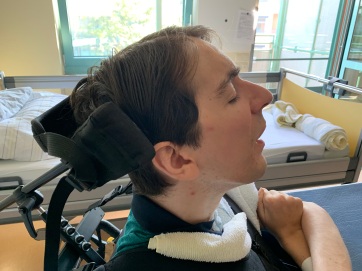 His head control and posture is getting better, not dramatically, but noticeably. The aim is to make less use of his head band.

He has no problem stretching out his right leg and the right hip seems to be fine. What still amazes me is how the problem with his leg and hip had affected the rest of his body. Or, the other way round: how the successful intervention in relation to the leg and hip now also helps his overall posture, his head position, his spine. Everything is connected to everything else.

One of the very beautiful moments this week in Germany was when we watched the return of the “Peking” to Hamburg.

The ship was launched in Hamburg in 1911, left for South America, and never really came back. She spent the past four decades in a Maritim Museum in New York and was sold to the ‘Maritim Foundation’ for US$100. They spent a million dollars to ship it across the Atlantic, and a further three years and 38 million dollars on refurbishment. She will now be the heart of the German Port Museum in Hamburg. There are a few interesting shots in the video, apart from the ‘Peking’ herself. In the week of 9/11, watch the huge jet flying towards Hamburg’s skyscrapers at the beginning of the video. And in the background of the ‘cover’ picture is Hamburg’s new, futuristic opera house – part of what has been called the German Bermuda triangle of Hamburg opera, Stuttgart train station, and Berlin airport – all several times more expensive than originally planned, and years behind schedule.

And then, of course, the name of the ship itself.

No surprise that Trump wanted it out of New York.