We didn’t have to try make him go to rehab. Pádraig didn’t say “no, no, no”. In fact, he couldn’t wait to go and was delighted that we were able to go a day early when a room became available.

The last few weeks felt like a trip down the stream on that dreamboat. I doubted. Would this work? There was an endless number of obstacles.

Pádraig, again, taught me that everything was possible. Nothing in my mind was crystal, but it was in Pádraig’s. There were never any doubts in his mind that this was the way to go.

We have gone a long way and, so far, he has been right. Of course, he would probably add. As always. 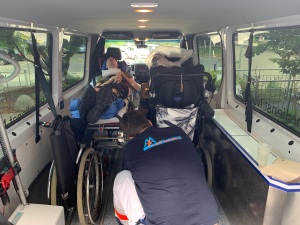 Last Tuesday, the ambulance driver turned up ‘on time’ at 8:30am while I was getting Pádraig ready. I had forgotten that ‘on time’ in Germany means 10 minutes early:) Eventually, we left ‘on time’ Irish time, 15 minutes late:), bringing Pádraig, comfortably on a stretcher, and myself from Munich to Burgau, just over an hours’ drive. It was great that he did not have to travel, sitting, in a car packed to the roof with ‘stuff’. That car followed separately, competently driven on the ‘wrong’ side of the road.

The five days in the Munich hospital with Pádraig were, once the operation was over, some of the best days I’ve had in a long time. We listened to podcasts, watched a couple of movies, rested a lot, had very few interruptions.

We didn’t have to worry about  food, cooking or cleaning up or anything like that. We just had time together. Even the soaring temperatures in the mid thirties weren’t too troublesome.

There were a few hours of physio, a welcome interruption. And an opportunity for Pádraig to show off his height. 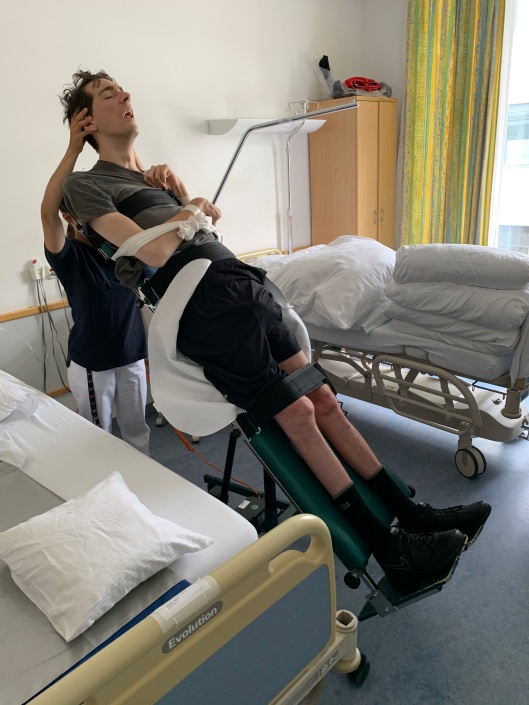 Checking in here at the Therapy Centre in Burgau was like meeting old friends. Circumstances had changed since Pádraig was here last. COVID had made its impact here too. There were tons of tests for infections. Face masks and other PPE. Once the first tests came back, the COVID test after less than 24 hours, things eased a tiny bit, but not a lot.

With caution, therapy started straight away. Over the first two days he was seen by an OT, physios, SLT, neuropsychologist, music therapist and a few doctors. He is staying on his own in the rehab centre during the night and while we are nervous, so far it seems to have been ok for him.

What Pádraig has been doing is astonishing. He put his weight again on both of his legs. Not only can he stretch out is right leg again, his whole body is much less tense. 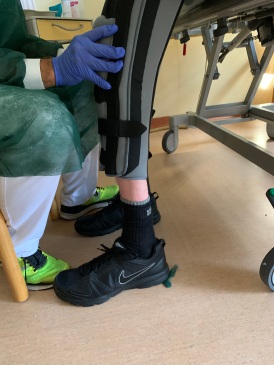 For the first time since his accident, he chilled out on a sofa. What a feeling that must have been!

And he played the monochord. Another first!

I had never heard of a monochord. It’s an amazing ancient instrument. If you hold it to your body when you are playing it, feeling the vibrations is amazing. It’s also used for meditation. Although the music therapist told us that it originated in Greece, it sounds a bit Indian to me alright.

The first few days here demonstrated what really experienced and dedicated therapists can do. They see and feel the body of their patient in a way that allows them to spot alignments and tensions others wouldn’t notice. And to re-align. They manage to assess the condition of their patient while working with them. While Pádraig had a bath/shower and was guided to wash himself with his hand in a facecloth they were able to assess the range of his movements.

It has been a privilege being able to watch and help and learn. All in a calm, reassuring and highly professional, quietly ambitious setting.

Standing again on both feet or chilling out on a sofa.

My Tweets
Join 953 other followers