It’s the way you look at things or, in this case, how you parse them. First, I saw Türkei-leset (Turkey let’s read). It didn’t make any sense, especially when I looked at the packet. It turned out to be a “door wedge set”, or a Türkeile-set. Germans have a lot of fun making up those really long words.

And the way you look at things is often determined by your expectations. A doctor once said to me: “You hear gallop and expect horses”. That might be mostly correct, but it might prevent you from seeing the zebras galloping around the corner. You won’t even look because you “know” already what’s coming.

Last week, I began to notice more about what was going on around us. One of Pádraig’s sisters once remarked that she thought the Germans were lacking a sense of fashion. I think she might be right – though some TV presenters are trying very hard. The “Free State” of Bavaria’s flag is blue and white – like the sky here, the Bavarians like to add. One morning last week, they were proven right. Much of the “white” was caused by planes  – a sight so unusual these days! And I had to smile when I read a “Leaflet on dealing with the Corona Virus” which included the recommendation: “Vermeiden Sie Busseln” – “busseln” being a real nice affectionate bavarian word for “kissing” which I hadn’t heard in decades (and young people will never discover if the Corona Virus continues its way).

Pádraig is doing well. The wounds from the operation are healing. Therapies are becoming a bit more challenging. He was up on his feet every day and spent some time in the robotic-assisted gait training device “Geo” – similar to the Hocoma Lokomat. Some of his therapies focussed on his posture, head control and his jaw. We are trying to explain that Pádraig’s neck was never straight as he adapted his to the height of the people around him. Apparently, sitting up straight,  developing his core strength, will help him with a dozen different things, like eating, drinking, breathing, voice production and more. 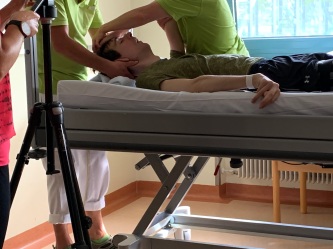 Nothing is perfect. But this is the first time in months that there is a glimmer of calm and predictability and normality. I have always liked adventures. I know Pádraig has too. But from time to time I like that warm, cosy feeling when I know where I’m going and why. I know it feels similar for Pádraig.

As a long footnote: yesterday, Moises Velasquez-Manoff wrote a fascinating opinion piece in The New York Times entitled: “The Brain Implants That Could Change Humanity – Brains are talking to computers, and computers to brains. Are your daydreams safe?”

Some aspects of what Velasquez-Manoff described I found particularly interesting:

“Imagine the possibilities when better brain-reading technology became available? Imagine the people suffering from locked-in syndrome, Lou Gehrig’s disease, the people incapacitated by strokes, who could benefit from a machine that could help them interact with the world?

“About two dozen people around the world who have lost the use of limbs from accidents or neurological disease have had sensors implanted on their brains. Many, Mr. Kochevar included, participated in a United States government-funded program called BrainGate. The sensor arrays used in this research, smaller than a button, allow patients to move robotic arms or cursors on a screen just by thinking.

People can already fly drones with their brain signals, so maybe crude consumer versions will appear in coming years. But it’s hard to overstate how life-changing such tech could be for people with spinal cord injuries or neurological diseases.

“Edward Chang, a neurosurgeon at the University of California, San Francisco, who works on brain-based speech recognition, said that maintaining the ability to communicate can mean the difference between life or death. “For some people, if they have a means to continue to communicate, that may be the reason they decide to stay alive,” he told me. “That motivates us a lot in our work.”

“In a recent study, Dr. Chang and his colleagues predicted with up to 97 percent accuracy — the best rate yet achieved, they say — what words a volunteer had said (from about 250 words used in a predetermined set of 50 sentences) by using implanted sensors that monitored activity in the part of the brain that moves the muscles involved in speaking.”

So much to learn. But, as one participant in these studies, Bill Kochevar, paralyed from the neck down in a biking accident, said: “somebody has to do the research.”

That article by Chang is about how computer-brain interaction can benefit from Machine Translation technology – a field I studied and taught for many, many years. Only this time it would be about “MT of cortical activity to text with an encoder-decoder framework”. Am I going full circle? Back to MT and parsing. And Turkey:)