Not in a hundred years… but once. Is cearta daonna iad cearta teanga agus tá cothrom na féinne tuilte ag lucht labhartha na Gaeilge, stated the member of the British House of Commons, Liz Saville-Roberts, a member of the Welsh party Plaid Cymru, yesterday in Irish, for the first time in a hundred years, in the British Parliament: “Language rights are human rights, and the Irish speaking community are entitled to equality”. She called on the UK Government to uphold its commitment to introduce an Irish Language Act if power-sharing institutions are not restored within six months.

Of course, they have not done it because they are dependent on the votes of the DUP from Northern Ireland who are vehemently opposed to the act. Human rights meet the pragmatics of realpolitik.

Tonight, Ireland’s best investigative TV programme, Primetime Investigates on RTÉ One, will be a programme on ‘troublemakers’ and how the official Irish health system deals with them. “Daring to challenge HSE’s comment, complaint service.”

One of the cases that will be reported on is that of “retired Dubliner Patrick Fitzgerald, a former trade union negotiator, (who) currently finds himself locked out of Cherry Orchard where his beloved wife Anne is a long-term resident in the Sycamore Unit.

Anne sustained a life-changing brain injury after slipping on ice nine years ago when putting out a wheelie bin. It is a random, catastrophic tragedy of such mundane origins, yet it has changed life irrevocably for the Fitzgerald family.” 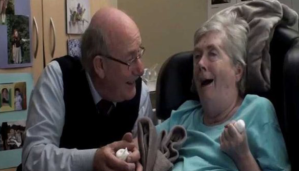 I know Patrick and he has in the past attended meetings of the An Saol Foundation. He  is a gentle man who, supported by his daughter Frances, is doing his best to make sure that his wife receives the best possible care.

Following his complaints about lack of adequate treatment for his wife in Cherry Orchard, the HSE, instead of addressing and investigating the complaints, has now restricted visiting hours of Patrick to one hour, Monday to Thursday, and they place a security guard at the door during his visits.

By comparison: “The Irish Prison Service is committed to making visiting a prison as easy as possible for visitors. The Prison Service understands the importance of helping prison maintain and develop relationships with family and friends and is committed to enhancing where possible, and subject to appropriate security considerations, the visiting facilities and regimes for prisoners.”

After tonight, the programme will be available on the RTE Player on the web.

Pádraig is doing really well and out for a concert in St. Patrick’s College (DCU) while I’m staying in trying to get rid of my cold. I am miss spending more time with him but, at the same time, really do not want to pass on my cold and cough…