The German word for “centre” (Mitte) and a spiralling circle around it. Nothing pointing in any particular direction. It was a happy moment today when I saw this piece of art in the office of the man in charge of the Aftercare Centre in Augsburg, the (charitable) “Nachsorgezentrum” built by Mr Schuster, a few years after he had built the Therapiezentrum in Burgau to cater for persons with acquired brain injuries who had left hospital and early neuro rehab, but could not (yet) live by themselves or at home.

Check out the ingenious pieces of art, made from simple wooden palettes, in the centre’s workshop. 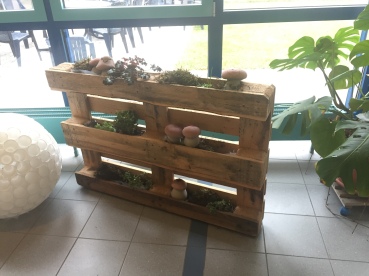 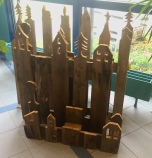 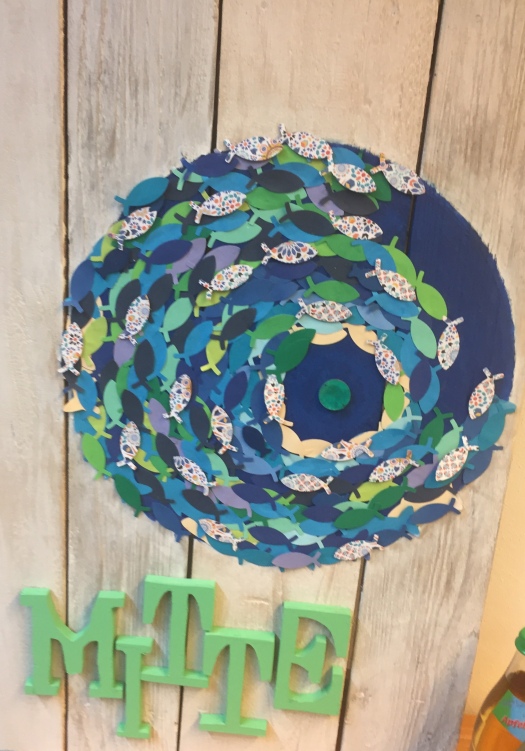 I had planned a visit to the centre for the past few years and this afternoon it finally happened. It is the most amazing purpose-built place to live in for persons with an acquired brain injury, with only one other similar centre being around in Germany, in Bad Tölz, in Germany’s deep South, deep Bavaria. And none I would know of in Ireland.

There is an ‘old’ part and a ‘new’ part, and both are outstanding. However, it is the new part that really shows off the skills, experience, and passion of the people (really: the person) who planned it – and who I met today.

I never knew why places I had visited previously always reminded me of nursing homes. There had always been a ‘clinical’ air about but I had not been able to put my finger on what had caused this, even when the people running them had the best of intentions to create a homely feeling. Today, all of a sudden, I realised why: because all those other places had long straight very functional corridors, and many of them had been painted in ‘calm’ brownish or clinical white colours. Here, there almost were no straight lines. the corridors were curved or the straight lines were interrupted by alcoves and open spaces – all in bright lively colours, with some funky ‘accessories’ interrupting and breaking up the otherwise bare walls.

Someone once told me (and must have told the designers of the centre in Augsburg) that you can never have enough space if you are using equipment and wheelchairs. There were not just art rooms, computer rooms, therapy rooms, quiet rooms and meeting rooms – there were also rooms to store equipment and a ‘garage’ to park (and recharge) all sorts of electrically powered cycles and chairs.

On both sides of the house was a really wide balcony, allowing a wheelchair user to go for a ‘walk’ and get a bit of fresh air – and even to pass another wheelchair user coming down the opposite direction. The house has living units each for about six persons having their own, large en-suite room and sharing a sitting area and an open plan, especially adapted kitchen. Each unit has been built so that it could, in the future and if needed, be used for other purposes involving persons requiring help and assistance.

The philosophy of the centre is that people do or get involved in everything a healthy person would be doing, such as cooking or washing their clothes. There is no pool in the house, so that people who could benefit from aqua therapy “have to” get out of the house and go to the pool – like a healthy person would do. This is also the reason why the building is very close to the city centre and all of its amenities, from public transport to shops and cinemas, but also a zoo and a small botanic garden.

What was equally exciting as visiting and seeing the centre at work, was the long conversation I had with the person who is in charge of the place, and to learn about his approach. For example, they have set up three different therapy praxis’ (physio, OT, and SLT) which not just serve the residents in the centre, but also persons in the community who require access to their highly specialised neuro rehab services. That way, they make the best use of their staff and, at the same time, generate an income for the centre (which helps them covering their running cost and paying staff).

Talking about running cost: we spent a good while going through a top-level cost estimate and reached the conclusion that the average amount currently paid for by the HSE for home care packages or to nursing homes would be sufficient to cover the daily rate we would have to charge in Ireland for a future An Saol Centre (with residential, respite and day units).

I have the feeling that, looking back in a few years time, I will remember this day as the day that plans for a permanent, purpose-built centre in Ireland for persons with a severe acquired brain injury took shape.

And here is what I missed while I was away: Pádraig went to the Hugh Lane Gallery which does not only have beautiful works of art (and some weird ones), but also a café offering beautiful cakes. Who could enjoy art on an empty stomach, I ask you? Sensible as he is, Pádraig decided “cake before art” and went for it in the proper order. 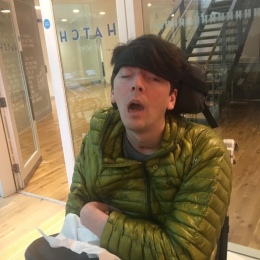 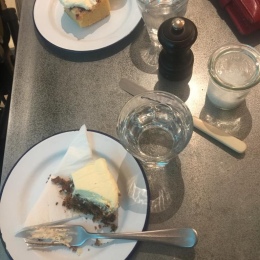 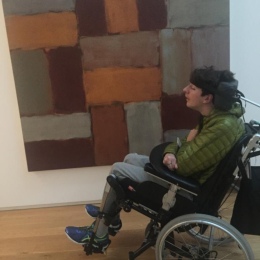 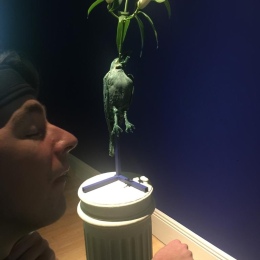 Just for those of you not familiar with the pieces exhibited in the Gallery: what looks like  an auld brown wall carpet from the sixties is, in fact, a piece of art by Sean Scully called “Light/Alba”. And the second piece on the pictures above , the one that might remind you of baby Jane, is, in fact, a piece by Niamh McCabe and it is, I’d never have guessed it, a dead painted bird. I have it on a reliable source that Pádraig was wondering whether Niamh killed the bird herself so she could paint it – or whether she had a cat who collected birds for her…

What do you think?

(You’ll have noticed that I had time on the plane back:)

2 thoughts on “Augsburg. And Art.”