What have “You raise me up“, “Rock ‘n’ Roll Kids” and “The Voice” have in common? Well – they are all, what Germans would call, a little bit “schmalzig”, sweet, maybe a tad too sweet. The other thing they have in common is that they were (co-)written by Brendan Graham. And Brendan Graham is an all time friend of Colm Ó Meachair. Colm was a harp maker. He died five years ago, just 66 years old.

Colm built Pádraig’s sister’s harp. They say, it took Colm about a month to built a harp – which might be true if he had just been building one harp at a time. I remember, that it took many months and many visits to Colm’s workshop in Marlay House before the big day finally arrived. Colm’s harps were shipped all over the world and he was instrumental in the revival of the Irish Harp.

Tonight, Colm’s friends organised a concert to remember this incredibly talented and modest man in Marlay Park. The music was incredible and the concert featured many famous musicians and songwriters, one of whom was Brenda Graham. There was an exhibition showing off around 20 of the magnificent instruments built over the years by Colm – among them Pádraig’s sister’s harp!

The summer is almost over. School is about to start again. It’s time for the annual Coffee Morning organised by one of Pádraig’s best friend and her family. Please join us and spread the word! 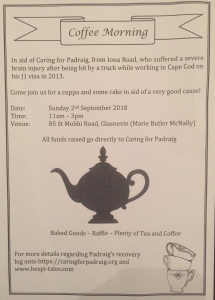