Tuesday is, at least during the summer, the day when life is easy and uncomplicated in Garding. Although the “Bratwurstmobil” advertises “Pommes, Bratwurst & mehr”, the “mehr” is not that much more. In fact, it’s just “Currywurst”. Drinks? It’s beer. Or “Alsterwasser”. Which is beer with a dash of lemonade. Simple. Not complicated. 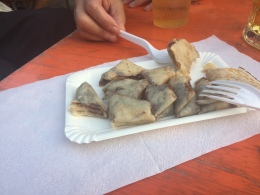 We introduced some complications today by getting Crêpes. With Nutella. But even with that complication, life and dinner remained straight forward.

Pretty good music tonight. We always go and stay at the same stage, one of at least four stages filling the ‘city centre’ of Germany’s second smallest city.

For Pádraig the evening was like a, admittedly not very sophisticated, music therapy session, He tapped with his feet, he moved his fingers and his hands to the rhythm of the music, tonight supplied by a band from Canada, they said. But then, it turned out they all spoke German and at the end of the evening, I think it was more a matter of some of the members having been in Canada. Once.

I love the mix of people filling the streets of Garding on Tuesday summer nights. There are hippies from the 60s, Wacken veterans, families with small kids, families with adult kids, lone alcoholics, beauty kings and queens, weather-torn people from the North, beautiful people.

It was a great night out. For all of us.