“Kindness is the language which the deaf can hear and the blind can see.”

This is just one famous quote by the author of the book of which Hemingway once said: “All modern American literature comes from one book by Mark Twain called Huckleberry Finn.”

Samuel Langhorne Clemens, better known by his pen name Mark Twain, also said: “Whenever you find yourself on the side of the majority, it is time to pause and reflect.” 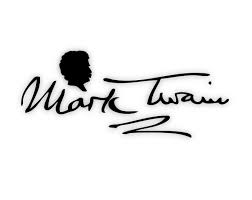 Mark Twain must have been asked for his signature so often in his life that he must have become bored by those repeated requests. Who knows whether he enjoyed all the attention he got when he became famous, or whether it bothered him.

I still can’t quite believe it, but today Pádraig was asked for his signature.

We had asked for some information from a hospital. When I got the call from a nice person working in that hospital telling me that the information was ready to be sent out and had been signed off by the consultant – but that the consultant had asked for Pádraig to sign the request – I didn’t know what to say for a few seconds. I was, as the Germans would say, “sprachlos”, speechless. Had we exaggerated in some way Pádraig’s level of recovery? The consultant surely knew and remembered Pádraig?

But then on second thoughts….

I thought what a brilliant idea that was. Not only did we use the opportunity, again, to speak about this to Pádraig, but it was him who took the decision. And we supported him taking it. If that wasn’t an act of empowerment and inclusion.

Tonight, I’m wondering why I had not thought about this myself?