Some blame Thatcher. Most of us blame Trump. Trump blames North Korea. Others blame climate change. The rain. The temperature. The traffic. The Germans. Rarely their mothers. More often their fathers. 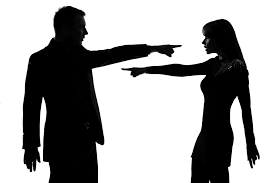 I have a friend who once told me: sure, psychology, first semester. First reaction: blame someone else. It’s called ‘psychological projection’ in psychological theory. We’ve all done it. It’s kind of liberating. You offload responsibility to someone else. So you don’t have to accept it.

The disadvantage is that with the blame and the responsibility you also hand over control. If someone else is to blame, you won’t ever be able to correct the wrong. Or to do the right thing yourself.

Blame also absorbs a lot of energy, and generates negativity.

If you want to change anything, you have to be positive, you have to believe that you are in charge and can really make a difference. And you need all the energy you can get to make that happen. And positivity.

Does that prevent me from blaming people and institutions for their truly hurtful, unjust and irresponsible actions? – No way.

The good news today are: Pádraig had a long visit by to of his best friends. AND, hear hear, he reduced the intake of fluid via the PEG to a record-low one portion!