It’s incredible how art can, literally, move people. Even out of wheelchairs. There was an art installation in Germany that invited visitors to interact with some really famous pictures. And someone who had not really got out of their wheelchair did just that. Aren’t these incredible things to happen? And the fun and excitement are palpable! 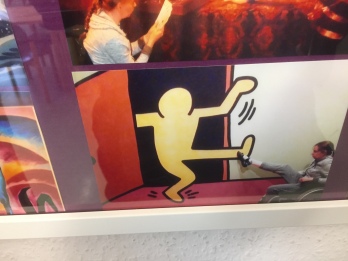 Sitting in the airport waiting to catch the plane back home. Over the past two days, I visited one of Europe’s largest and Germany’s oldest and most experienced organisations working with disadvantaged and disabled people. It was like an intensive course on how an organisation grew, what it did to provide the services, the work they are doing today and what their plans are for the future. – About 10-15 years ago, they started to realise that there was a big gap in services provided to persons with brain injuries and have developed several models. We can build on that experience, on what worked and what didn’t.

One of the really significant lessons they said they learned is that it is not advisable to work with large groups, large being around 25 persons. So, our idea to start small seems to be spot on. As is the plan to integrate and ground the project in the surrounding community.

PS: There is an interesting article, written by Tom Clonan, about his view on what the State does for the so-called ‘disabled’, like his son. His conclusion is that he’s had enough. He calls for a “Yes Equality” campaign for our ‘brothers and sisters disabled by the State’. Of course, he has a case. If one thing is missing, it is the idea of how exactly he proposes to get this campaign off the ground and a few more details, like what, exactly, does he want to achieve and, exactly, for whom. I suppose, what I’m thinking is – there are tons of people (and dozens of ‘disability’ organisations) who’ve had enough and who’ve called for a campaign of some sorts; to succeed with what sounds like a huge campaign potentially we have to know, exactly, what we are looking for and for whom. To give you a taste here’s an extract from Tom’s article (it’s also worthwhile reading the comments):

Personally, I’ve had enough. Ireland is the only member state of the EU that has not signed the UN Convention on the Rights of People with Disabilities. Would Irish men and women tolerate a State that detained citizens on aircraft because of their sexuality or sexual orientation? Would Irish citizens tolerate a system that demanded 24-hours notice of travel of the LGBTI community? A State that confined over a thousand LGBTI citizens to an Irish style gulag archipelago of nursing homes? No. So, why impose this on the so-called “disabled”?

I say no more polite lobbying for the “disabled”. We need a radical transition to a rights-based approach to the rights of our fellow citizens who are disabled by a discriminatory State. I’m up for the fight. I would ask all of our citizens, including the LGBTI community, to support us in this fight.

In other words, as a father to a boy who is different, I am asking my fellow citizens to support a call for a Yes Equality campaign for our brothers and sisters disabled by a State that actively discriminates on the basis of physical and intellectual need.

Is Leo Varadkar – Taoiseach for those who “get up early in the morning” – prepared to vindicate the rights of early risers like my son?