After a great night’s sleep we made it to Cherbourg, passing Omaha and Utah beaches as well as loads of cementaries where young men are buried according to their nationalities. One day, we must come back with more time to visit these places that shapes my parents’ lives. Every day living with this uncertainty – would they survive to see the next day. And this invasion, would it finish the war? 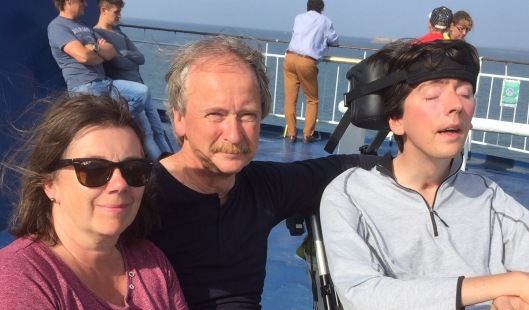 We’re on the Irish Ferries’ Oscar Wilde registered in Nassau – which is neither in Galway nor Mayo but on a much warmer Island far far away… Insurance must be cheaper there.

We’ll be arriving in Rosslare tomorrow morning, as Pádraig did almost two years ago. And how much things have changed! Unbelievable.

Not only will we be heading home instead to the National Rehabilitation Hospital, but we’ll soon be starting the An Saol pilot – something we only dreamt of just two short years ago!

And that will still only be the beginning!!!

My Tweets
Join 954 other followers