The temperature today had dropped about 20 degrees. At least that’s what it felt like. We were lucky, because we’d never have managed today’s mountain tracks in yesterday’s heat. 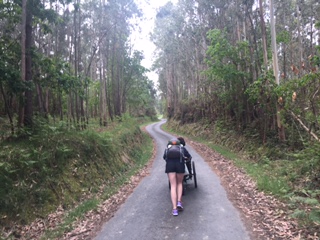 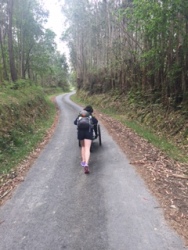 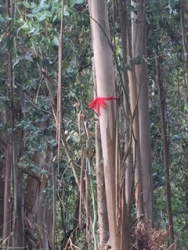 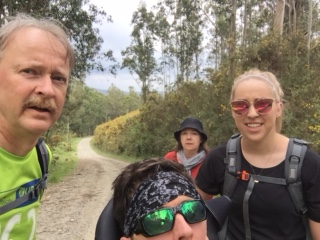 Our camino is definitely not about speed or about getting from ‘A’ to ‘B’. It is all about the journey itself. About us, together, being able to do this. Up vertical tracks, across rocks as big as the Rockies themselves, through grass as high as our hips. When it eventually started to rain we had reached a paved section of the Camino and smoothly rolled down to where today’s journey ended and tomorrow’s will begin.

For the past couple of days, we’ve had a very late ‘lunch’ (in Ireland we’d call it dinner:) in a restaurant across the street. As we always arrive around the same time, the same stuff is on the telly. A twenty minute weather forecast that leaves everyone completely confused, and the Spanish soap ‘Servir y Proteger’, serve and protect, described by the Spanish public broadcaster RTVE as “Un melodrama policiaco con gran peso femenino y un reparto de auténtico lujo” – you don’t need much Spanish to understand that:) What really surprised me was the ‘peso feminino’ in the series and the dialogue, for example today when one of the female police officers referred to one of her male colleagues as un ‘verdadero machista retrogrado’. On public and publicly funded state TV! How times have changed in Spain!

An old friend of Pádraig’s (she calls him ‘Paddy’, so she must be a swimmer:) sent him an email wishing him all the best and recommending to him (and us) to listen to a piece of music she performed with a group of musicians in different parts of Ireland. It’s called Path of Miracles by Joby Talbot and comes in four movements (one for each of the four cathedrals on the Camino Francés) – with ‘Santiago’ being her favourite one. We were listening to it this afternoon after our walk and it truly evokes the spiritual and meditative side of walking the Camino. She says, one day she’ll be walking the Camino. I know she will!