Being German and all, I’d heard of mistletoe but up to today didn’t know what it is all about. For example, I didn’t know that Loki tricked the blind god Hodur into murdering Balder with an arrow made of Mistletoe, being the only plant to which Balder was vulnerable. Did you?

I also didn’t know that mistletoe has become part of the Christmas celebrations in many parts of the world:  a man is allowed to kiss any woman standing underneath mistletoe. Bad luck befalls any woman who refuses the kiss.

Which is where Justin Bieber comes in with his song – though you must endure the whole song to get to the bit with the mistletoe.

When we went for a walk with Pádraig through the Botanic Gardens, just a stone throw away from here, we also found out what mistletoe looks like. 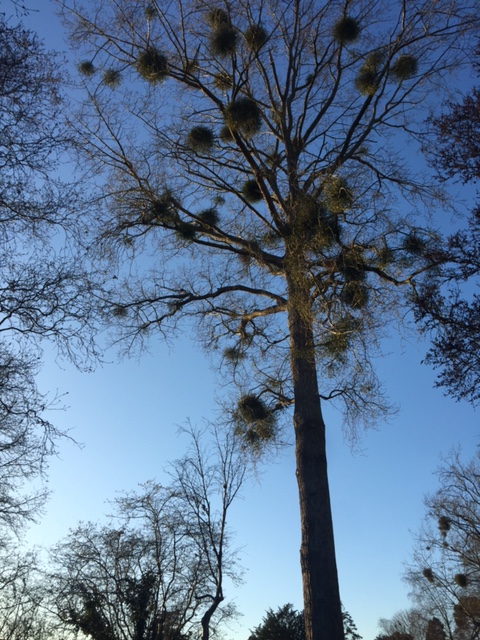 No. These aren’t, although they very much look like, bird’s nests, but mistletoe – a plant that lives off the tree in which it settles. While it was regarded as a pest, it’s now recognised as an important contributor to biodiversity – and home to hundreds of animals. In Australia, 240 different birds, or 75% of the species, build their nests in mistletoe.

As you can see – the weather was beautiful here over Christmas and Pádraig got a lot of fresh air.

Next year, remember to kiss under the mistletoe. For good luck! (It’ll be hanging in Teach An Saol – the centre for persons with severe acquired brain injuries and their families!)