I had never heard about the Hague Conference on Private International Law, the World Organisation for Cross-border Co-operation in Civil and Commercial Matters. They agreed the Convention of 13 January 2000 on the International Protection of Adults which furthers some important objectives of the United Nations Convention on the Rights of Persons with Disabilities, in particular those of Article 12 on equal recognition before the law, and Article 32 on international co-operation. 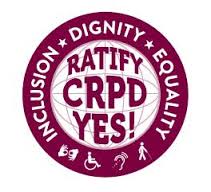 Because like many other international conventions, Ireland signed it (in 2008), but never ratified it. It never entered into force.

If it had, a German court order making us legal guardians would be recognised in Ireland.

As you might have heard, the Assisted Decision-Making (Capacity) Act 2015 is supposed to come into force before Christmas. Today, someone who knows about it, said they didn’t believe this at all and, anyhow, who knows if there will be a Government by Christmas?

Pádraig had a visit by some journalists and photographers today and more will be coming over the next week. He agreed to have his picture taken and for us to talk about what is going on (or rather, what is not going on) in order to address what is a national scandal and disgrace.

Today I thought: 90+ year olds are brought, in wheelchairs, from their home to day centres maybe twice a week to play Bingo (whether they want it or not) so that they have some social contact. There is nothing, absolutely nothing comparable for young persons with a brain injury. That’s the way it is, we’re being told. Better get on with it.

Well, this is not it. We won’t get on with it. It won’t remain this way. Because we will not allow this to continue. We will make this a public cause and public representatives will have to act if they want to be taken seriously.

There should be a convention, not on paper, but in our minds and our hearts, agreeing that we afford everybody a life – with or without a severe acquired brain injury.