If you are in Dublin, you’ll be joining us in Smithfield this coming Saturday, first for the film in the Lighthouse Cinema at 10:30, then for (free!) lunch at 13:00 in the Distillery Building (Bar Council) and then at 14:30 for the official launch with the best speakers you could find on the topic of neuro rehabilitation! The only thing you need to do to join us is to register for the film and the launch – if you haven’t done it yet, do it right now. And make sure to bring your friends and family with you!

This is the one occasion for us to show that, together, we are serious about what we are saying.

Today, I sent out the press release to dozens of journalists. And the personal invitation to our Taoiseach, some ministers, and special TDs. One of them, Maureen O’Sullivan, has already confirmed that she will be joining us for the film!

In the meantime, have a look at our new website, the videos on the home page, as well as the video on our sponsors for the cycle from Boston to Hyannis, which is now up on the News Section of http://www.ansaol.ie. Also, check out our new video with Mags Rogers of the Neurological Alliance of Ireland on our mission page, supporting the NAI’s campaign to be launched next week: We need our heads examined.

Remember the letter we sent to the Attorney General’s Office and that of the Governor (cc to German and Irish Departments of Foreign Affairs, Embassies, and Boston Consulates)?

Remember we never got an answer?

I wrote to them again today, asking to meet them on Friday, 24 June, in Boston: 160613 Letter AG and GOV f2 It’s a short letter but has, as an enclosure, the letters we wrote almost exactly a year ago. If you have the time, it’s worth reading. When I read it again today I thought: how could they have ignored this? It’s pretty damning, I think…

Last, but not least: In the absence of an arm trainer on the MOTOMed (it still has to be ‘assessed’ – hard to believe), Pádraig used his hands and arms anyway, as good as he could, while exercising. 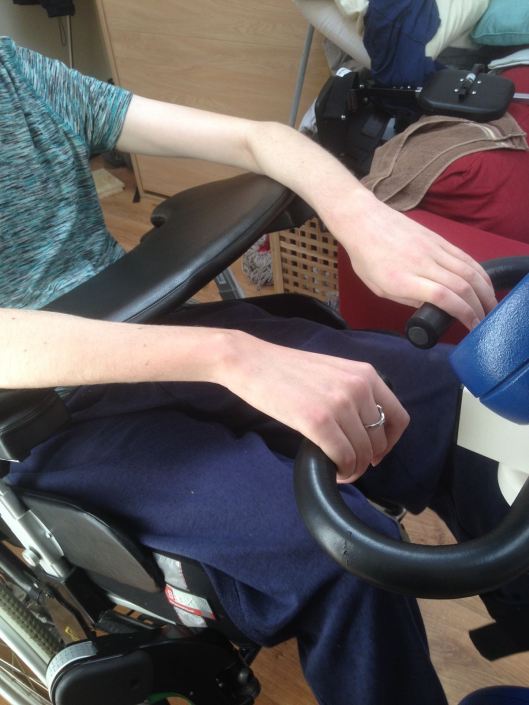 Sounds like a full day? – Almost forgot to tell you about the meeting we had with the organisation providing carers and the HSE. But to go into that would, as the Germans would say, “den Rahmen sprengen” (~ “blow up the frame” – there must be a better, less violent translation!).