I’d never heard of the place. My guess is that few people have. It’s the name of a village that was located where the Jordan enters the Sea of Gennesaret, most likely at et-Tell, a ruined site on the east side of the Jordan on rising ground, 2 km from the sea – which poses, you might be surprised to hear, a bit of a problem to those interested in age-old writings. 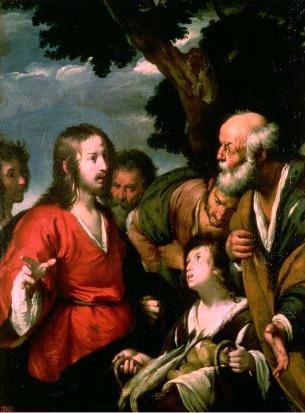 Because it is reported to be near the place that Jesus withdrew to privately by boat when he had heard that John the Baptist had been killed and where he then performed his first miracle. (Strangely enough, there is an explanation for why a fishing village could have been so far from the water, but I won’t go into that now, you’ll be relieved to hear:)

Jesus’ first miracle was “the Feeding of the 5,000”, the only miracle (apart from Jesus’ resurrection) which is recorded in all four canonical Gospels. So it is important. In case you haven’t heard of it, here is a short summary.

The Feeding of the 5,000 is also called the “miracle of the five loaves and two fish” because just five barley loaves and two small fish supplied by a boy were used by Jesus to feed the crowd after he had had “compassion on them and healed their sick”.

When I was reminded of this story last weekend, I thought that the message of this first and most important of Jesus’ miracles was clear: with compassion there is no end to the essentials of life. Everybody can be fed and be cared for, in the widest sense of the meaning.

Imagine Jesus not helping sick or injured persons because they were too sick. Saying to his disciples “no point helping them, they have no future anyway; let’s help those with lesser injuries, at least they have a life ahead of them.” Saying, “take those five barley loaves and two small fish and enjoy them. Don’t you waste those scarce resources on those hopeless cases out there.”

You don’t have to be the son of God to know that saying something like this would have been wrong, would have been one of those sins which you can’t be absolved from by praying a Hail Mary and Our Father.

Here’s a group of people celebrating with Pádraig his birthday last Sunday, dreamboaters, who’d never give up on anyone. Not in Bethsaida, not in Dublin, not anywhere else.

Please don’t forget to promote An Saol Day, 18 June. Please get your tickets for the movie and launch today. Invite your families and friends. We need you there on the day to show our strength and commitment!