Yesterday was practice day, today we all did it: we went for the full bath in the holy water, the whole family (not all together:). We asked Pádraig a few times on different occasions before we brought him back to the ‘piscines’ and each time he said ‘yes’ he wanted to do this. It was freezing. And cleansing in a way. We were accompanied by one of our friends and carer who took a bath himself. I’d say its something that’ll stay in our memories for a good time. 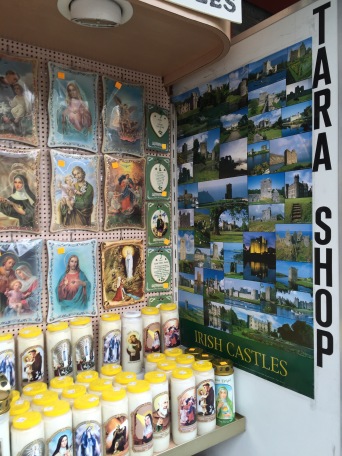 Capturing the Irish in Lourdes

Get your photo on a candle with the Virgin

Homeless in Lourdes at 6am this morning

Our group of injured and sick with their helpers

A really difficult thing today was a pretty long ceremony involving the sacrament of Anointing of the Sick. It is supposed to give courage, hope and strength to get better – rather than falling into a state of despair, amongst other aspects of it.

However, the ‘tone’ of the ceremony and the focus on the suffering of the sick created an atmosphere where several sick and injured people just burst out into tears and couldn’t contain themselves any longer. Life is hard, difficult, and, at times, almost impossible to take. The sick and the injured become the victims that you have pity for. But how would anyone be able to live a life that the rest of the world looks down on in pity? Pity has a time and a place. And then everybody has to move on to the exciting, positive, and can-do outlook on life. Injury or not.

One really nice thing we did was having a walk along the river.

How different Lourdes looks and feels in nice, warm sunshine!