Today Pádraig met a few men from Armagh who did what you do a lot in Lourdes, they prayed. With him. In Irish.

The miracle of Lourdes for me, when I was here some decades (!) ago for the first time with my grandmother, was that you could have a bath in the holy water and didn’t have to dry yourself: the water just disappeared from my skin. Later I heard that this is something that is supposed to happen to everyone. Ok, it made it a bit less of a personal miracle, but I still thought that this was really something…

Last year, Pádraig didn’t go to the baths, the bath came to him. Two very strong gentlemen, with a bit of help by myself, put him on a stretcher, carried the stretcher to the bathroom, put the stretcher on top of a bathtub, and first washed Pádraig with ‘normal’ Lourdes water, before giving him a second ‘wash’ with the real thing: pretty cold spring water from the holy well. It was a bit scary and required a very special operation during which we managed not just to put the whole bathroom but the whole floor and corridor under water as we noticed too late that the water outlet in the floor of the bathroom was blocked… 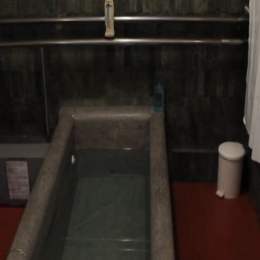 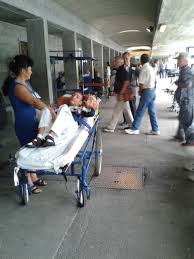 Note: the pictures above are not ones I made.

This morning, Pádraig went to the ‘piscine’ and, with the help of almost a dozen very dedicated helpers from France, Italy, Germany, and Ireland took the ‘light’ version of the Lourdes baths. He didn’t quite go into the tub, but was covered in wet towels and water head to toe.

You should have seen the smile on his face. I don’t think he’ll ever forget the man from Armagh! Neither will I!