There but for fortune, love is just a four letter word, the night they drove old dixie down, Joe Hill, diamonds and rust, we shall ovedrcome – definitely.

She sang at the Newport Folk Festival in 1959 for the first time and, ten years later, in 1969, of course, in Woodstock. 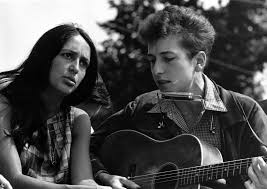 It was she who made the songs of her young, a little rough looking and completely unknown friend, Robert Zimmermann, or Bob Dylan, world famous. She mostly sang covers and it was he who gave her almost supernatural voice songs that expressed her thoughts and feelings. In later years, Bob talked about his relationship with Joanie, and invited her to join him on the Rolling Thunder Review, documented in the 2019 movie by Martin Scorsese.

She was eighty yesterday.

She gave a concert in Dortmund’s Westfalenhalle, I forget the year, where I experienced her absolute magic. It’s one of Europe’s biggest indoor venue. She sang, alone and completely solo, playing the guitar, in front of 16.000 people, completely stunned by her.

We were in the An Saol Neuro Rehab Centre one day last week getting ready to go, when Pádraig decided to continue exercising. In and with his wheelchair.

He started doing it all on his own and then, when we encouraged him, continued doing it. No cramps, contractures, or involuntary movements. This was slow and controlled and voluntary. He did this after four hours of therapy. Was he tired or exhausted? To me it looked like as if he was just ready to get going.

It proofed to me that we can be very wrong when we are trying to protect people like Pádraig by not challenging them, by going easy on them, by assuming tiredness when there is energy that needs to be put to a purpose.

We will overcome one day. Because we will continue the Dreamboat journey, being lead and encouraged by people who for many look so vulnerable and desperate that they nearly would prefer to forget them altogether.

Here is to Joan and her eightieth Birthday, her great voice and unbroken spirit.

We will overcome. One Day.