Carl Fredriksen is old. So he is sentenced to sell his house and move into a nursing home. Like a good man. Instead, he escapes at the last minute by tying thousands of balloons to his house. Himself, the house, and a stowaway go Up in the air and on an adventure trip to Paradise Falls in the South American wilderness. 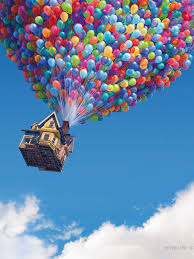 I mean, what is wrong with this guy? Why can he not face the facts? Does he not realise that what he is doing there is highly dangerous and certainly not in his best interest? Does he not see how irresponsibly he is, putting himself and others in danger?

It is society that looks after old and incapacitated people like Carl. There are rules. Rules that are, if necessary, enforced by the Courts in his best interest and for the good of society. Even if he doesn’t agree. Because he is old and has obviously lost all good and reasonable judgement.

Why did Pixar, surely aware of their own responsibility as a huge movie maker, decide to let this deranged old man escape and let him go on this incredibly mad, irresponsible and dangerous adventure trip instead? Do they want to encourage other people to do likewise, “follow their dreams” and probably kill themselves in the process? How is it that they were allowed to make this movie at all at all, show it all over the world, encourage this highly irresponsible behaviour?

Maybe they were just after the money. With a box office intake of $731 million, Up became one of the highest-grossing films of all times. People seem to like Carl’s idea of doing his thing.

Pádraig’s regular dentist retired. We had to look for a new one and found a “special care dentist” on the web who turned out not to practice anymore, except in the Dublin Dental Hospital. They said, Pádraig needed a referral and that there was a one year waiting list. We sent the referral but didn’t get as much as an acknowledgement.

Eventually, we found a dentist in the neighbourhood whose practice is accessible and who saw Pádraig within a few days.

I stayed with Pádraig for the consultation which took a full two hours. The dentist cancelled other patients he had lined up for that afternoon to get the two holes in Pádraig’s teeth fixed. Dentists are generally not people you’d like. But this dentist was incredible. Committed, professional, caring.

We had another good day last week. So good, we decided to go out for a walk and check out how Pádraig would like moving through An Saol’s car park standing up. He immensely enjoyed that. A whole different perspective.

I think we all need that from time to time: A whole different perspective. Doing the crazy, immensely adventurous thing.

We can do things. We don’t have to wait until someone does it for us. If we try, we generally find others who will join and support us on our journey. We can do more and better if we do it together. We have to get Up, accept responsibility, find like-minded people, support each other, and become the change we’re looking for.

The alternative is to live like Vladimir and Estragon and wait forever.