What a week. Both, the one that just past and the one lying ahead.

I took dozens of pictures and as many videos of the arrival of nearly half a dozen of crates and as many men to take them off the truck and onto An Saol’s premises. The 500kg crates were nearly impossible to get off the truck, they had to be taken apart outside and then the parts moved one by one into the building, some of them around the building first, so we could get them through the doors. Not good if you have a weak stomach or a bad heart. Then nearly two days of assembling, three days of training and a mini Open Day for just over an hour to show a very small number of selected guests around the building and demonstrate the mind-blowing equipment. There were families there, some clients, representatives from different organisations, including the HSE, Headway Ireland, Roisín Shortall, our brilliant buildings project manager, staff etc.

What happened last week was the result of years of very hard work. It was a first in Ireland. It will, for the first time, allow us to offer dedicated Community Rehabilitation, supported by state-of-the-art robotic-aided gait training equipment. It was historic.

But it is this picture of Sara Walsh’s father that I like best.

We met Sara and her parents first in Beaumont. We learned from them what to look out for when you spend long periods in an acute hospital. Very sadly, Sara died later. When I was wondering whether to go ahead with An Saol or not, it was the very generous and completely unexpected donation from her family that took that decision away from me and made it clear that it had to go ahead.

So we decided to dedicate the Gait Training Area of An Saol’s Rehab Centre to the memory of Sara. Or better: to her presence. Because she is with us and will always be.

The biggest regret is that Pádraig could not be there with us. He is the driving force and inspiration behind An Saol. Not only did he come up with the name and the logo (initially for his Irish language podcast), but with the concept and the implementation. Every day, he is convincing medics, politicians, other families and society that there is ‘life and living with a severe acquired brain injury’. 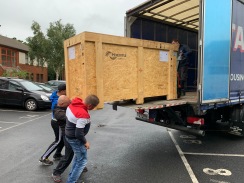 A heart-felt “thank you” to everybody who contributed to this incredible achievement. Family, friends, supporters. This was a dedicated team effort that went on for years. No one on their own could have made this happen.

Later today, we’ll be driving back towards Pforzheim. We’ll get there tomorrow after a half-way overnight stop. Tuesday will be Pádraig’s first appointment with a consultant to assess his hip. Monday week, he’ll have another one and then we’ll know more. Both appointments are in different cities. It’ll be a busy 10 days or so ahead of us. But sure….