There’s tons of scary stuff going on out there. Frightening stuff. I think everyone of us would have a story to tell were they asked to do so. One that would frighten the living daylights out of everyone listening.

Pádraig today carved a truly scary mask out of a real pumpkin. 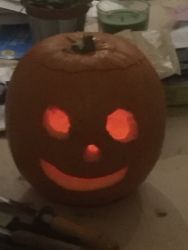 “Health and safety” was suspended for a time as he took the knife and got to work.

It was one of his best friends who had brought the pumpkin to do the carving. It was so good, the interaction so lively, the way he found out from Pádraig how he would like the pumpkin to look like, the ‘yes’ and ‘no’ questions, the preferences, even the alphabet chart – it was so incredibly good, I stayed out of the room and let them get on between the two of them.

The result was truly scary! Even before the put a candle into the centre and set it alife.

Tuesday is swimming day. And swimming had been really good.

But nothing, nothing in comparison with the afternoon of scary pumpkin carving with his friend!