Amanda Denton suffered a severe brain injury in May 2014. Her struggle for rehabilitation was vigorously supported and well documented by her partner Tommy on  “The Help Amanda Denton Get Rehabilitation Page” on Facebook. 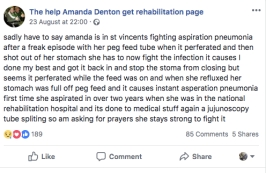 Hundreds of expressions of sympathy from people around the world have been sent to Tommy over the last couple of days. It will not take away the terrible sense of loss Tommy must be feeling but the knowledge that there are so many people thinking of him and Amanda might give him the bit of extra strength that he will need to get him through these difficult times.

Just a couple of years ago, Amanda’s case was highlighted by well-known Irish journalist Kitty Holland in an article she wrote for the Irish Times, “Brain injury rehab: ‘No one gave Amanda a chance’ – Woman’s partner is ‘disgusted’ at lack of ‘serious therapy’ after traumatic accident”. In the article he is quoted as saying that Amanda “never had a proper shot at rehabilitation”. And even today he wrote: “its not over I will dedicate the rest of my life highlighting the neglect in this country in Amanda’s name and wont stop till laws are made to stop it.”

Both Amanda and Tommy have been great fighters. I am sure that Amanda will never really leave Tommy’s side and will be there with him, supporting his struggle to make proper and adequate neurological rehabilitation for those suffering a severe acquired brain injury in Ireland a reality.

Here is one of my favourite songs. It’s by Victor Jara and it’s about remembering Amanda…

May she rest in peace