“Blasmusik” is the right answer to the question “which kind of music would you associate with Bavaria?”.

Every year, the Therapy Centre in Burgau invites their staff and present and former clients to its “Sommerfest”. There is plenty of food and drink, together with music and craic. There are people coming from near and far who spent some time here in Burgau following an illness or accident. It’s a brilliant way to get everybody together for a day, to stay in touch with old friends and to make new ones. Organising this must be an enormous effort, but it’s certainly worthwhile.

Pádraig skipped some of his usual hospital-type meals and had a feast of Bratwurst, Radler and Kuchen and Torte.

He also went on the Geo robotic walking machine to beat his own personal record with 1868 steps, I’d say way above what most of us here would have been able to do.

Earlier, I had prepared Pádraig for the day. 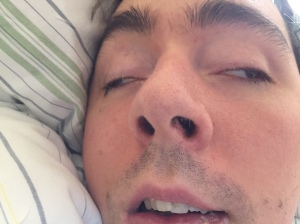 I talked to him about what was going to happen and not only did he seem to be very happy about it, he also opened both of his eyes and smiled while listening to the plan for the day.

Finally, and for the record, another first: I place towels beside Pádraig to wash him and position them underneath his arms and shoulders, pushing them slightly underneath his body. When I was about to do this today, he lifted up his left arm to allow me to do this. Another first.

All in all a great day in Burgau!