There are three hugely challenging situations for live commentators: the visit of the Pope (when people are gathering and waiting for his appearance); cricket matches (nothing happens for days); and the run up to royal weddings (when they have to pull out all the stops for an essentially mundane affair). Live broadcast of that weeding in Windsor today started in Germany at 11am on (almost) all channels. And there were hours to be covered with live commentary when nothing whatsoever was happening, apart from people piling up in front of Windsor Castle and celebrities walking towards the venue. The most unimportant ‘facts‘ became a headline, like the letter Meghan had written at the tender age of 11 to the then First Lady, Hillary Clinton, to complain about a sexist TV advert. I switched off before they had a chance to discuss what it meant that she is Shakespeare’s fifth cousin 13 times removed, and a close relative of Churchill, his sixth cousin five times removed.

The world has gone mad. Definitely. 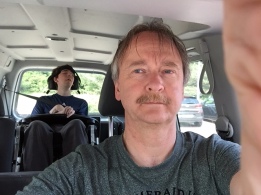 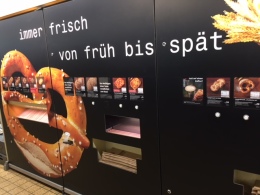 After our slow, late, and leisurely breakfast, Pádraig had a go on the MOTOMed (again at 60+ rounds per minute beating all his previous PBs), followed by lunch and then a trip to the shops. We can borrow a wheelchair-enabled car here which gives us a bit of mobility. It was hell. First, Google sent us up the hill on a road that couldn’t have been narrower and bumpier passing by each and every one of Pforzheim’s “Schrebergarten”, plots rented by the good people of Pforzheim to plant their own fruit and vegetables. Then, there was no parking and not even an entrance to be seen for Media Markt. When we made it to the alternative Saturn superstore, it was packed with people who had decided to buy supplies to keep them going for two days of closed shops. We didn’t even all get into the shop and decided to head home, passing by a real German ALDI where we discovered a machine that was dispensing bread the same way machines have been dispensing packets of cigarettes for decades. That way, you can be sure that the bread you’re getting hasn’t been handled by a dozen other customers before you put it into your shopping basked.

I am thinking about how to kick-start the Day Centre for people with very severe acquired brain injuries in Ireland upon our return, with or without the money from the HSE. Some interesting stuff came up, for example: if we had the funding allocated to two families for intensive home care, we could employ three therapists (at German rates) and three carers, and rent basic premises. If we had access to the funding of more families, we could add transport, robotic walking equipment, transport and additional staff (co-ordinators, drivers, kitchen staff, more therapists etc.). Currently, we don’t have access to that funding, but in my mind, there will come a time when we will have to claim it with the support of as many families as possible.

In a very radical way, if needs be.