I remember having read somewhere that dentists as a profession have the highest rate of suicide. Do you like dentists? — There you go. Have you ever been asked a question when you sat back in their chairs, mouth wide open, several suction devices, mirrors, pointy needles and latex-covered fingers poking around in your mouth? I mean, I’m struggling to breathe and not to choke on my own spit! How on earth could anybody even think I was able to talk? Usually, I’m not able to think, I’m so tense, my whole body nearly going into spasm in anticipation of this terrible terrible pain that hits your body when the drill hits that nerve. 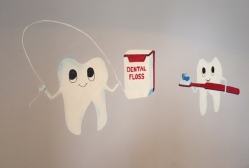 But — not all dentists are equal (and what I said above is not really true about my dentist either:). Pádraig today went to see the dentist that had fixed his teeth over years using all sorts of sophisticated wires and pressure points. We were looking around in the waiting room and Pádraig recognised the funny pictures on the wall. And then we discovered that poster on the back of the door, advertising The Dreamboaters! Imagine! The dentist is one of us!

When it was Pádraig’s turn, he recognised the dentist immediately and gave him a huge smile. In turn, the dentist told him that he was really impressed by the good condition of his teeth and gums. So nothing at all to worry about. He gave the teeth a good deep clean (using tropical flavour!) and asked us to come back in a year. He said it was a pleasure to help!

On the way back home I thought: What has the world come to? Nothing is as it is supposed to be anymore! Nice dentists?! I mean… and this one is even a Dreamboater!