Stir fry. Nothing special about it. Noodles. Carrots. Mushrooms. Mini corns. Beans. Crunchy. Not soft. Sizeable chunks. Not minced or squashed. Nothing special about the stir fry (though a big ‘thank you’ to the brilliant cook who prepared it:) — but about Pádraig eating it today. A big plate. With no problems whatsoever. 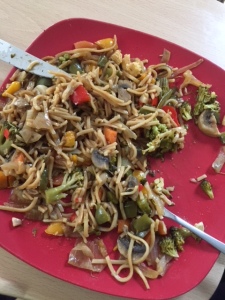 During lunch, we watched self-made documentary. I had searched for “Into the Wild” on Netflix. What it threw up instead was this film called “Expedition Happiness” about a German couple and their dog renovating an old yellow school bus in the USA and driving it through Canada to Alaska and then back down to Mexico.

It sounds like everybody’s dream come true. It’s something I’d so much would like to do with Pádraig. In my mind, this would be the ultimate neuro rehabilitation journey. Participation. Integration. Thinking that, instead, we are struggling here every day, waiting for an HSE office that is waiting for another office to give the go ahead who, in turn, are waiting for another HSE office to agree to the go ahead, who, in turn, need permission from another level — sounds almost insane. And I’m not even sure if I have all the levels listed here — all that more than a year after the go ahead was officially announced by the Minister of Health himself as well as the HSE.

I had to think about our idea of going to Alaska.

Looks like we won’t be doing it this year. One of us here will have to get better first. But we will go.

“Strong. You can do anything. You can go anywhere. Money, power is an illusion. It’s up here. You can be here. Me and you.” (Christopher Mccandleuss)

PS: One of Pádraig’s friends called in this afternoon for a few hours. The second day in a row his friends were with Pádraig. It is truly outstanding how they keep in touch and maintain their friendship. Something that is probably more important to Pádraig than anything else.