The best ever concert in rock history, without any shadow of a doubt, must have been The Last Waltz by The Band on 25 November 1976. Thankfully, it was recorded live and has become one of the absolute classics. That’s where I came across Ophelia first. In his song, Robbie Robertson was asking –

Boards on the window
Mail by the door
What would anybody leave so quickly for?
Ophelia
Where have you gone? 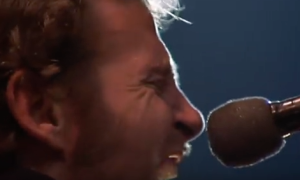 Ireland closed down today because of the ex-hurricane Ophelia. Schools will still be closed tomorrow. It was as if time had stood still. As if nothing else was happening in the world but this storm. It reaped havoc, hundreds of people are out of electricity, people even died – as predicted by the media yesterday. Today watching the TV, listening to the news was like watching reality TV. It was happening as we were watching it. Dublin’s streets were deserted, shops were closed, people stayed in their houses hardly anybody went to work, following the advice by the government not to go out.

This storm was an event.

On other days, the news are equally desperate, full of disaster: murders, bombs, threatened annihilation of the world by maverick politicians, police corruption, health system failures, housing crisis, and the likes. But Ophelia was special. One big bad thing and nothing else. For an entire day. Today, Kim Yong-un could have launched the entire missile reservoir and we wouldn’t have heard anything about it. Today was about Ophelia and nothing else.

But soon it will all be forgotten and the attention will  shift to the next disaster. Ophelia, where have you gone?

I’m saying this, because I am getting through a tough time as so many others are. And I’m saying this because I would never be able to survive these times without that helping hand.

Pádraig was delighted to meet his new carers (from Germany) today; to experience the storm of the century; to use his standing frame; to experience new food and new textures; to live. Pat is also getting better, though she is still very sore.

Tomorrow, we’ll ask ourselves: Ophelia, where have you gone? While continuing with our boring, every day struggle, feeling the pain, having fun, feeling despair, laughing about the twist and turns of our lives, being happy and fortunate to be in the company of Dreamboaters.