JFK would have been 100 years old today. Pádraig is 27. – There was a little bottle of German ‘champagne’ on his table this morning for breakfast, with 22 karat gold flakes in it – you’d be afraid to drink it because you’d probably never ever pass a metal detector unchallenged. There was also a box of chocolates and a really nice card on behalf of the owners and staff. The therapy room had a huge banner with Happy Birthday and all morning people came in singing him birthday songs, even when he was doing his hour in the Lokomat. There were cards arriving in the post and a never-ending stream of whatsups and text and video messages and phone calls from around the world, literally. 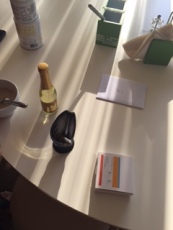 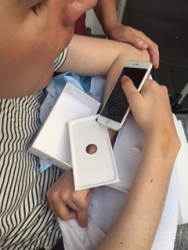 In the afternoon, we went to an electronics shop to buy Pádraig a mobile phone.

He  knew what he wanted. The size of it. What colour it had to be. The cover it should come in.

We didn’t really have enough time today to connect him via his new phone with his friends, but we managed to get it started and to install Whatsup on it. One step at a time.

Of course, there were the memories of this night four years ago when we saw each other for the last time before the accident happened less than a month later. When we say him arriving at this restaurant, when we had a lovely meal together, when we left and said good-bye outside – him about to leave for Boston and us going to Germany the following day. There was this seagull with little sticks in her mouth about to start to build a new home for her family – and we did not know then that it was seagulls that followed Pádraig from Cape Cod, Hyannis and the hospital, back to Beaumont and Hamburg, all the way.

Then, we’d never had thought, never would’ve imagined that we would be here today, supporting him in his struggle to regain some control over his life – getting him a mobile phone, the first one for him in a long time.