You must have been waiting with almost unbearable curiosity to find out which word Pádraig wanted to spell yesterday. I must say that I thought about it all night. A German word, beginning with “B”.

So, the first thing I did when his last PA had left this morning, was to sit down with Pádraig to spell the rest of the word.

Ok, most of you know Pádraig or have got to know him a little through this blog (I hope). That’s why expect that you will not be too surprised to hear that the first thing Pádraig told me was that he didn’t want to spell a German word beginning with “B” anymore. He had changed his mind. The word was to begin with an “H”.

It was so funny. It was one of these moments that I felt really really felt so close to him and knew he was there right beside me.

The next letter was an “I”. I then noticed that he had a bit of a problem distinguishing between the “M” and the “N”. So I asked him, could I guess the remaining letters – which is how we spelled the word “Himmel” together. 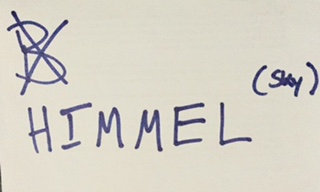 If you have a bit of German then you know that “Himmel” can have (at least) two meanings: ‘sky’ and ‘heaven’. Pádraig confirmed that he meant ‘sky’ and told me that he was wanted to see loads of it today and during our walk along the Kerry Camino on Thursday and Friday.

We must put the rights of disabled people at the heart of our society. We cannot, and must not, allow the next twenty years to be a repeat of the past.
David Isaac, chair of the EHRC

What David Isaac, chair of the British Equality and Human Rights Commission, said at the launch of the most comprehensive analysis of the rights of disabled people in Britain echoed in my mind all day. He added, “They must have the same rights, opportunities and respect as other citizens.”

Ok, I thought, fair enough. But (and we all know there’s always a “but”) – But what if they are treated as if they were already almost dead? What if more than 60% of them are diagnosed wrongly as being in a permanent vegetative state, without conscience? What if the only treatment afforded to them is water, nutrition, and medication? What if families are told not to waste their hard worked for fundraising money on their loved ones but go to the Canaries instead? What if they are told by the experts that therapy would be wasted on them?

Would it be time to “trying to petition for improvements”? Or should we bring a case to the United Nations Commission on Human Rights, the European Court of Human Rights, or even an Irish Court?

I know – improvements are coming. But: for those affected every day counts.

And at the moment we are loosing too many of these precious days. I am not seeing progress being made, agreements being honoured, phone calls, emails or texts being returned, despite an agreed pilot project.