10 years ago today, the Irish Government proudly signed the UN Convention on the Rights of Persons with Disabilities (CRPD). Over these ten years, Ireland became the last country in the EU and one of the few countries left in the UN yet to ratify the CRPD. 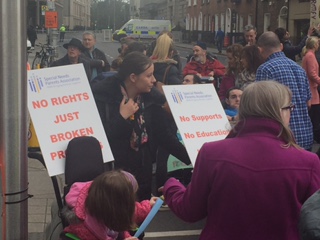 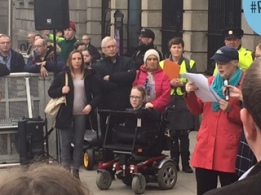 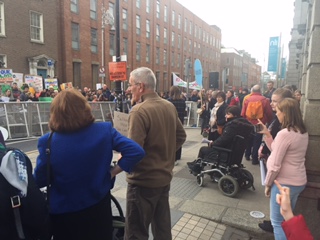 So there was a call to protest in front of the Irish Parliament, Dáil Éireann, in Dublin to let the Irish parliamentarians know loud and clearly that we want them to ratify the CRPD now. There was a really good turnout and the speeches delivered by so many representatives of so many different groups representing so many different disabilities were brilliant.

There were ‘corporate’ statements and there were accounts from the every day frontline of living a life with a disability. It was one of the most powerful demonstrations I have attended, it was also the most heartbreaking. The people were not talking about something abstract. They were claiming their right to a live with dignity and respect. As equals. With equal rights. Like the 64-year old twins shouting out their frustration at a health service that offered pads rather than personal assistants who could help them going to the toilet. – It is nothing short of disgraceful.

And one other aspect I found hard to believe: this highly successful event, broadcast from all Irish media stations today, was organised by one single person and her friend – not by the highly State-funded disability federations and representative bodies.

One single person with no limbs who doesn’t know limits: the truly amazing Joanne O’Riordan @NoLimbsNoLimits