At a meeting this morning, the HSE confirmed that the An Saol Project we proposed to them will be funded and that we will start with its implementation straight away. 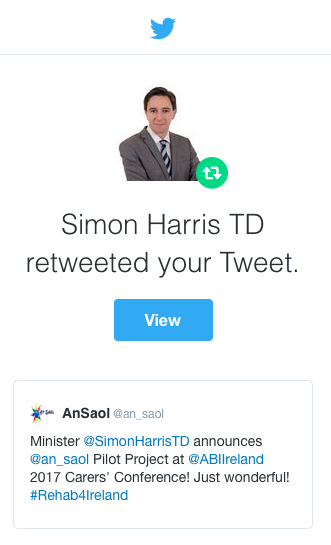 About an hour later, the Irish Minister of Health, Simon Harris, T.D., confirmed this during his opening address at the National Carers’ Conference. He caught me a little bit off guard as I had not expected the announcement by him, so I lost the first few seconds of his speech. Here is what I managed to record, the Minister talking about An Saol:

I have been assured that we will receive an official letter from the HSE by the end of the week.

It’ll take a little time to sink in. But if this is all true, and there is no reason to suspect it ain’t, then we’re about to embark on some really good and exciting work here that will change the way how people think about those who have survived a very severe acquired brain injury, as well as the way they and their families are being treated by the health system.

A big thank you to all who have helped us to make this happen!