“Country of origin: Germany. Not suitable for human consumption.” (Herkunftsland: Deutschland. Nicht zum Verzehr geeignet.”) What is your first thought when you read this? Whatever you’re sinking, my first thought was that this is a pretty biased label. And I’m not making it up!

But the real strange thing about the label was that I found it when we were buying Christmas trees!

I mean: even if you were really enthusiastic about stuff originating in Germany (many people are:), would you need a word of caution telling you not to take out a bite off that Christmas tree? Come on! – This is like the allergy warning required by the EU that salmon might contain fish!

Life would be much less fun without this stuff. But it does seem to be a bit of waste. Especially as the label was in German, and it was fixed on tree for sale in Dublin! It’s irony is lost on most buyers! And if it was meant in earnest – what about those poor buyers not speaking German? Buyers who just might chew off a nice juicy branch?! 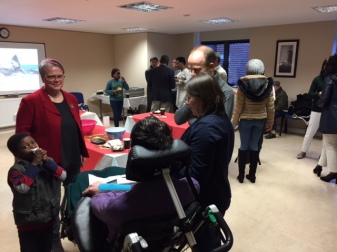 This afternoon we went to a farewell party. A good friend and supporter will be heading back to Germany later next week. Her friends, most of them from Drogheda, gathered to bid her fare thee well! Although it was a long auld drive up North, Pádraig really enjoyed the trip and the party. It was sad to see our friend getting ready to go back to the ‘Heimat’, but good to be with here today to wish her all the best! She has already planned her next visit to Ireland so in reality it won’t be very long until we’ll see her again!