Ní neart go cur le chéile – We found this great Irish saying in The Poet and The Patriot yesterday, *the* Irish Pub South of San Francisco. There is no strength without unity. 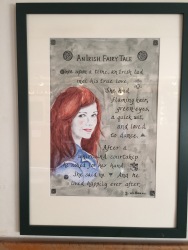 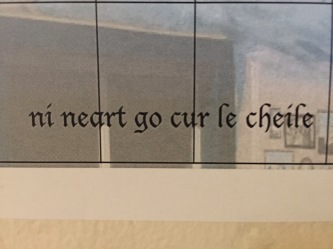 Santa Cruz is the town I never lived in. But would’ve like to, had I discovered it earlier. We have been talking to people who tried to live without touching money – not without money, but without *touching* money. And surprisingly managed to do so for months. We met people without credit cards, mobile phones, TV and radio. The news they needed they heard in their community. They consume goods produced in their neighbourhood, they wear clothes that are made by their neighbours, they have no cars (but re-cycled bicycles), and get services from people who they provide services to in return. Combine this with the amazing climate, the ocean on one and the mountains on the other side and you’ve got pretty much everything you need for a good life.

I couldn’t stop thinking that the people we met were very much like Pádraig and many of his friends I’ve had the privilege to get to know a little bit over the past three years and a bit. Just slightly older:) So imagining a world without fast food chains and a without a throw-away culture is after all not only the thing to do, it’s possible to live in such a world, to create it for yourself and your friends. It might not be perfect, it might not work 100% the way you want it, but you can get pretty close to it.

I have constant doubts about doing this cycle. Whether this is the right thing to do. And I suppose, I’ll never know. What I do know is that I’m learning nonstop on this cycle. I’m learning that my body is still able to do pretty amazing things. I’m learning that three ‘old guys’ and an equally ‘old tour manager’ can get along brilliantly on an impossible adventure, with all their different personalities, warts and all, because they are good people doing a good thing.

Most of all, I’m learning that people, that we can live the life we choose to live. We don’t have to follow what mindless advertising is trying to drum into to us. We can make choices. We can show others that there are alternatives to a culture where just about everything seems to be disposable, measured in terms of purely monetary ‘return on investment’, where people become line items in an accountant’s spreadsheet. Where billion dollar companies don’t pay tax and hoard their gigantic profits in remote island states instead. Where the injured and the sick are managed, instead of being cared for.