Last day in boot camp, reaching for the sky. We had planned this for week: leaving Pádraig’s fingerprints on the ceiling. Note: he is standing on his feet, the therapists beside him are standing on chairs – and still can’t reach the ceiling:)

But the really amazing thing is not that Pádraig can reach for the sky (we’d had known that for a long time:), what is really stunning is that he can almost stand by himself. He is getting some support, but very little. He can’t really hold his head up straight nor his upper body all by himself when he is standing, but he is getting there. He is holding on to the specially adapted ladder in front of him, a therapist sitting beside him on a chair secures his legs, I am supporting his back and head a little, while the third helper his helping Pádraig to leave his fingerprints on the ceiling!

TheJournal had an article about our meeting with Simon Harris and his officials recently which is absolutely great. Almost 10,000 people checked it out over the past few days. 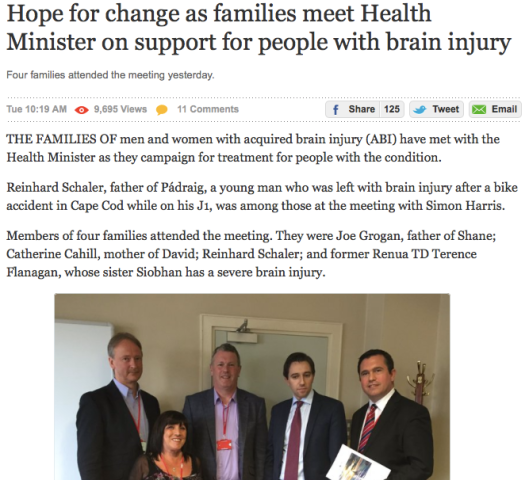 Finally, one of the really cool therapists is booking his holidays for next year – including a few days around the first week in August – because himself, Pádraig and I are planning to go to Wacken next year! Waaaaaaaacken!!! So in the spirit of Heavy Metal, I checked out some Bon Jovi songs to get into the swing of it. And the songs are just brilliant. Pure Dreamboater stuff! “It’s my live” and “Living on a prayer”

Turn up the volume to max!

After five hours of travel (!) we’re now at the gate of Aer Lingus’s flight back to Dublin. It’s half an hour late (for now) and we’re getting more tired as time passes. I’d say we’ll be collapsing into our beds when we’ll get home tonight. Pádraig told us today that he loved boot camp in Pforzheim, the positivity, the drive, the celebrations of each and every little and big step forward! But he was also looking forward to getting home. Looks like we’ll have to combine both: home and intensive therapy. Leaving our fingerprints along the way.

My Tweets
Join 954 other followers