Something really cool happened today. Pádraig went into his bank. As one does. And he asked for his bank statement. As one does. And was told they’d send it out to him. They don’t do bank statements in the bank anymore. No hustle at all. – Isn’t that great? The way to do it. Pádraig knows exactly what he wants (and doesn’t), he communicated that to the lads in the bank, and there was no reason not to get that for him, right?

But first things first: here is to the health professionals who make a huge difference to the lives of so many people every day. Here is to the health professionals who have made a difference to Pádraig’s life. To those who believe that he is alive, that his mind is alive, that his brain functions, that he is capable, ambitious, interested, curious, highly intelligent, full of humour, full of energy, full of love of life, love. Beautiful. That he has a right to his physical integrity and a life with dignity and respect. Thank you for the amazing work you are doing, the difference you make to his life and to our life, and to the life of others. Keep up the good work!

However (there is always a “however”:) – imagine a situation, completely fictional, hypothetically, where a young person (or an old one like myself) suffers a catastrophic brain injury. I know it’s painful to even think about it. But try.

Imagine, completely fictional, hypothetically, that person’s family and loved ones being asked questions and given ‘information’ like: “Wouldn’t it have been better if s/he’d died?” “Did they ever consider not to operate?” “Oh, we don’t expect him/her ever to speak or to walk or to eat or to drink or to think or to feel or to communicate!” “Scarce resources have to be invested in patients with a hope of recovery (therefore, not in your son/daughter)!” “Your son/daughter is stable now and does not require any more physio at the moment.” Or, even one ‘better’: “The therapists will be back to see him/her in half a year’s time or, maybe, a year, unless s/he gets significantly better in the meantime – then, naturally, they’ll return earlier.”

Imagine a situation, completely fictional, hypothetically, where family members are getting distressed when being talked to by the professionals (because of the way they are being talked to). Where family members take tranquillisers before attending meetings with the health professionals because of the almost unbearable stressful situations created in these meetings. Imagine years of hard, draining struggles by families for the most basic rights of their loved ones, the right to a life not confined to medication, hydration, and nutrition – when they and their injured family member have already enough ‘struggle’ on their hands and when they should be offered, with pride and as a matter of course, all the help they need.

Imagine a situation, completely fictional, hypothetically, where injuries, such as dropped feet or contracted limbs, where psychological damage and severe social isolation and abandonment of injured (and their families) are knowingly accepted by the State services as being part of what happens to survivors of severe acquired brain injury (and their families).

Imagine a situation, completely fictional, hypothetically, where those who highlighted the shortcomings of services, the lack or appropriate resources, the lack of knowledge by professionals of the incredible power of the brain to heal itself, over years and decades, and especially if offered really intensive mental and physical exercise, if they are threatened with solicitors and serious consequences for their loved ones.

Now imagine, again completely fictional, hypothetically, that this young person began to breath, eat and drink normally; that they started to ride their exercise bike by themselves every day and began to take control of their body; that they were able again to understand complex situations, take decisions, and communicate them to their family and, with assistance, to those around them; and that this, their autonomy, was (with some very honourable exceptions) not recognised by the State.

Now here comes the question of all questions:

Just hypothetically, I think it would be guilty on both counts. – What do you think?

The Irish Sun followed up on their larger coverage yesterday, with a short update by their political correspondent, Myles McEntee.

The coverage was also picked up by Dubin Live. 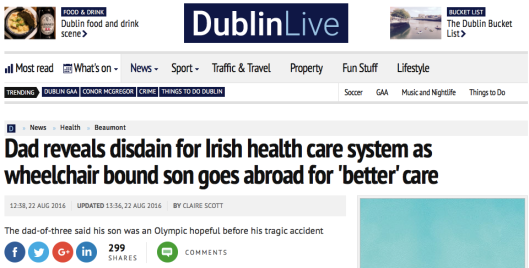 Met Pat Kenny today, for the first time, in Newstalk, where he interviewed me – the interview turned out to be a bit longer than planned and they had to find another slot for it. He didn’t want to edit it. So powerful was the stuff he heard. I really hope that whoever will listen to the interview tomorrow, hopefully at around 11am, will share that view. Will be touched. Will be outraged. And do something. With us.

Because doing nothing, leaving things as they are, is not an option.