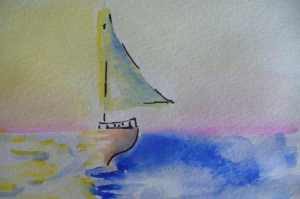 The idea was to tie loads of big plastic bottles together so that the structure would eventually become large and strong enough to float, and carry a frame together with some passengers. During a few months that spring time our back garden became a makeshift shipyard. He wanted to sail away. In his own, home-made raft. There was an incredible determination to build this flboat, and a very strong believe that he just had to keep at this to make it all happen. Reasoning, planning, ‘real life’ issues, even physics – none of these really boring, ordinary life constraints stood in the way of his dream that was so much bigger than mere ‘real life’. 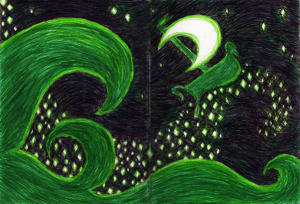 Do you also have your best dreams towards dawn? I can, when I’m really lucky, turn around and continue these early morning dreams should I get disturbed for a second, I feel I can manipulate them and they almost become reality. Last night, or rather this morning, I had one of these dreams. Pádraig and I had entered a boat race and we had built the boat ourselves. Of course, we had built it so well, there was no need to even float it before the day of the big race, never mind test-sail it. The day of the race I woke up early and thought I should get the boat down to the water to see whether it would float. It didn’t and I got it back to the house quickly before anyone else had noticed. A couple of hours later, Pádraig and I pulled the boat on a trailer down to the water, with family and friends joining us and wishing us the best of luck for the race. Pádraig was so excited (and I was so worried) when we pushed the boat into the water. Of course, the boat floated and we took off towards the starting line. – Although I tried really hard, at this point I could not ignore Pat anymore who was pulling me back into the ‘real world’, telling me it was time to get up. So I don’t know whether we won the race or not. But, after all, that wasn’t important at all. What was important is that Pádraig managed to make our ‘boat’ float – when I had almost sank it and drowned myself during my early-morning secret trial driven by last minute doubts.

Today, Pádraig was off the respirator and breathing by himself (assisted by a humidifier and oxygen) for several hours. He is still bloated from all the liquid his body absorbed during the SIRS, but getting back more and more to look like himself. They are considering the removal of one of the two drains. He is on the mend. For a few hours, during New Year’s Eve, I had a doubt – when Pádraig was just pushing out the boat far far away right to the starting line.