There is a gorgeous view of the Black Forest, the “Schwarzwald”, from the balcony of the therapy centre in Pforzheim. Sitting here on a good day can make you forget your troubles. 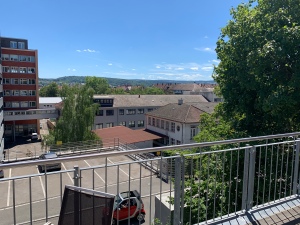 When you talk to people here, many will tell you that what they most like about the place is that people are motivated and engaged and ambitious.

Some have brain injuries, more have spinal injuries. All of their lives have changed forever since their illness or accident. But they all believe that if they keep trying their life will become better.

Sounds pretty ordinary, doesn’t it? Everybody’s life changes all the time. Plans don’t (always) work out, (some) dreams seem to disappear in thin air and God is laughing his head off watching us humans wondering where it all went wrong.

But most humans would agree that things, life, will get better if they keep trying. Practice living. It helps.

Only that the challenges people here are facing are a bit tougher than average.

Everybody here has heard doctors, nurses and therapists telling them that they should ‘face the facts’ and accept their life ‘as is’. Some have been told their lives are basically over. I know at least one person who has been told he’d be better off dead.

That would be true if life wasn’t worth trying.

People here are 100% convinced that life is worth trying. They have not given up. And it shouldn’t come as a surprise that because they are trying, very hard, they are making progress in their recovery. Most importantly, they live their lives. They have disappointments and they have successes. They are sad, at times, and they are happy, at times. They are bored and they’re having fun.

We’re still trying to figure out how best to approach the problem with Pádraig’s hip. Good friends are helping and we hope to get a better picture over the coming week.

In the meantime, one of the therapists here gave us a loan of a ‘handshoe’ mouse for the weekend for Pádraig to try it out. It’s a mouse that fits his hand like a glove. While Pádraig finds it difficult to move his hand with the mouse, it was no bother for him to click the right mouse button with his index and the left mouse button with his middle finger of his left hand. Once, twice, or many times. Very controlled. – Here is a very short demo of how he does it.

We knew he could control the movements of his fingers, especially of his left hand. But it was the ‘handshoe’ mouse that provided the support for his hand. We’ll have to figure out how. But I know that being able to use two buttons will allow Pádraig to control a computer, to drive a wheelchair, and to do many more wonderful things.

Yesterday, Pádraig’s Kia did not start and I got a jump start from a fellow patient in a wheelchair who got down to his car, drove up to the Kia, opened up the flap under the passenger seat to access his car’s battery and helped me to get the Kia started.

In between he told me that he didn’t even think about the truck driver anymore who had knocked him off his bicycle and abandoned him on the roadside for dead. He was focusing on enjoying his life as much as possible.

When he left he said that he was really happy for having been able to help me.

He didn’t get there on his own. He had people around him he could trust. People who believed 100% that his life, like their own, was worth living. People who kept trying. Like himself.

Pádriag is living his life. He has never given up. His believe in life inspires me and his trust humbles me.

It’s hard to know these days who you can trust. Definitely not the banks, probably not the builders, there are serious doubts around the politicians, the church, the police and the justice system. ‘Trust me, I’m a doctor” is a good song but questionable as a statement.

By contrast, I’d fully trust the man in the wheelchair who helped me start Pádraig’s car. I trust Pádriag with my life. Is it because they haven’t promised me anything? Because they keep trying in the face of terrible adversary?

“Someone press the reset button on the world”, I read yesterday. Would that be an option? – Giving up most definitely isn’t.

Pádraig could click that reset button. With his index or his middle finger.