The An Saol Project is making progress. Looks like we finally found premises that are half-way affordable. Next steps are planning permission (change of use), fire and disabled access certifications. We will need to make some modifications to the building but will keep those to a minimum.

We really do need to get the premises up and running as soon as possible. It is a great pity that the old tabacco factory we had planned to refurbish won’t work out: the amount of refurbishment work that needed to be done would just have taken too long and would have been to expensive. Hopefully, we’ll be luckier with this new, more modern building.

I received an invitation to join a good friend to give a talk at RehaCare, Europe’s largest rehabilitation services and equipment exhibition taking place every year in October in Düsseldorf. It’ll be a matter of leaving early and returning late, on the same day. Not really looking forward to the long day, but to the visit and the fair.

Thursday is one of Pádraig’s physio days and as almost always, he manages to do something he hadn’t done before. Nothing major. Rather subtle. Which makes it almost  more spectacular. Today, he was lying with his tummy on a matt on the ground, propping himself up on his elbows while one of us was supporting his head. With his feet rectangular to his legs and his toes tug into the ground he lifted up his knees and straightened his legs. Try it. It’s difficult. Try it a few times:)

In the afternoon he often goes for a spin on the MOTOmed stationary bicycle. For some time now he has been cycling by himself, without the support of the built-in motor. But, today,when he was finished, for the first time he managed to get his feet and legs off the pedal all by himself. 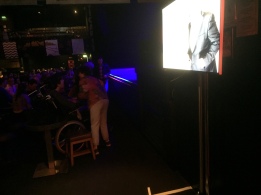 Tonight, Pádraig went to see Irish comedian Dara O Briain. A really good friend had given him two tickets for his birthday before the summer – and there was quite a bit of competition for the second ticket. His cousin on visit from down under won. Pádraig really really enjoyed the gig!