It was a breathtaking match. We were matching each goal and then, with just 3 minutes 16 seconds to go, we took the lead with 3:2. Then, with 55.2 seconds to go, they caught up. 3:3. One of our players was sent off in over time. And within a minute the OAR scored and won the gold medal. – If you are like myself, you’re now going to google OAR – which country is that? Only to find out that it is not a country at all but Olympic Athletes from Russia. Isn’t that really, incredibly funny – all the athletes came from Russia, but Russia did not win!? I mean, come on….?

But we didn’t allow us to get depressed and decided to have some fun. We went out for Sunday lunch. To Ikea. To Ikea? 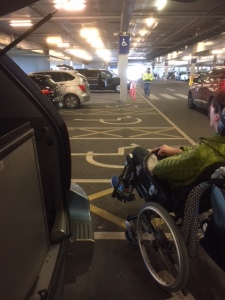 You’re right. That isn’t really that much fun at all at all. But going out, watching so many families moving through this gigantic furniture superstore, was brilliant. The food in the ‘restaurant’ was really cheap and, mostly, not too bad. The ‘Dime Cake’ could even be recommended. Pádraig took about a minute to finish it up. Nuts and all.

And in IKEA, for the first time, someone told Pádraig she had been following this blog; someone we had never met, someone we didn’t know. She said that she felt she knew us really well and that she was delighted to see all the progress Pádraig had made, and how he was out and about. Even in Ikea!

If that isn’t encouragement!

Even if we lost against the OAR.